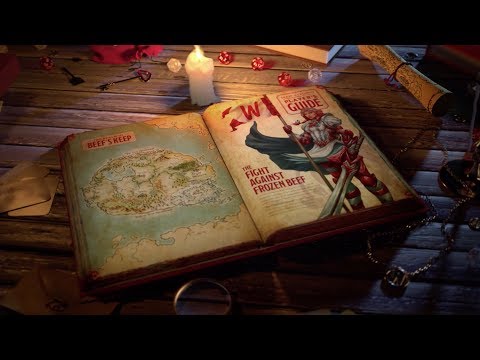 Fast food marketing is a weird world. Sometimes it's as simple as giving out free food. Sometimes they're making games where you date Colonel Sanders. Is it supposed to make you sexually attracted to fried chicken? Rewire your brain so that only 11 herbs and spices can make you feel whole?

Whatever the motivation, sometimes you wind up with a thoughtfully crafted and meticulously planned out "Dungeons & Dragons"-style RPG. Ahem. "Sometimes" may just mean once, but that once is right now. Wendy's has constructed a Wendy's-themed table-top role-playing game called "Feast of Legends" that you can get for free.

"The nation of Frestovia has been the lone beacon of hope in the land of Beef's Keep for decades," the site reads. "However, the Ice Jester and his rogues gallery of frozen fiends threaten Queen Wendy's reign of prosperity." You get the idea. Beef puns. Fresh beef and Queen Wendy are the good guys, and the Ice Jester aka Definitely-Not-Ronald-McDonald and his friends are the baddies. You trek your way through the French Fry Forest, Frosty Canyon, Dave's Double Hills, and Costa del Spicy. It's basically the chain's favorite barb in game form.

The PDF is free, and the most surprising part is that it's not just a pile of garbage. The book is 97 pages long, and the art is fun. It's clear that a lot of work went into the game. Why? Maybe you get a hunger in the middle of a game and need a JBC. Hopefully, at some point, you'll be able to program your new Colonel boyfriend to play "Feast of Legends" with you.

Dustin Nelson is a Senior Staff Writer at Thrillist. Follow him @dlukenelson.
Thrillist TV
History of
The History of the McRib