The Tightly-Rolled History of the Blunt

Whether you’re a cannabis connoisseur or not, you’ve probably heard of a blunt. 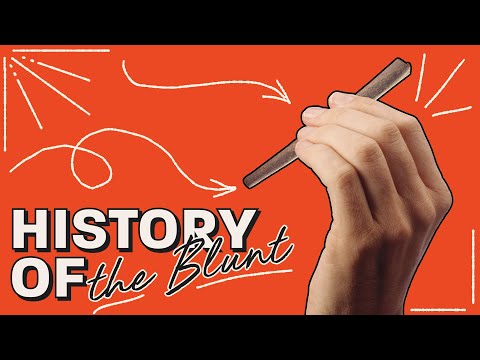 If you’ve participated in a little puff, puff, pass action in the last few decades, there’s a good chance you’ve smoked a blunt. Even if you haven’t, you’ve probably heard of one. Blunts are really just cigar wrapping filled with weed. The history is a bit hazy, but we’ll get through it together.

Before we can get to blunts, we have to travel all the way back to central Asia in 4000 BC. Several cultures start cultivating cannabis plants for their seed oils and fibers like hemp. They’re not smoking it yet, at least not that we know of. In 500 BC, people in the Pamir Plateau, now China’s Xinjiang region, start putting specially grown HC-heavy cannabis plants into incense burners at family funeral rituals. We’re not sure about funerals, but this may definitely make holidays with family more bearable.

Cannabis starts spreading through the old world through the Silk Road. People all over the world realize that getting high has its benefits. Cannabis plants and seeds are useful too. As word, and use, of cannabis spreads indentured servants from East India start bringing it to Jamaica for personal use in the mid-1800s. Hence why the Hindi term Ganja is still widely used in Rasta culture.

It’s unclear exactly why blunts became so popular in the Caribbean, but there are theories. One theory suggests blunts became popular out of necessity because pipes, bongs, and rolling papers weren’t readily available. Another suggests Jamaicans liked cigar wrappers better because it helped to disguise the smell of weed. One final theory suggests smoking blunts let people smoke more weed at once, which… if you’ve ever smoked a blunt alone or with just a few people, you know that’s true.

People all across the Caribbean start smoking weed and getting creative in how they do it. They often use dried tobacco or hemp leaves instead of pipes or bongs to smoke it. Around the same time in the United States, companies like White Owl start making cigars of one continuous rolled outer leaf with a rounded tip. The latter gives them their name: blunts. Not long after, Phillies and Dutch Masters get in on the action and eastern Pennsylvania becomes a hub for blunt-making.

Cannabis continues to grow in popularity for obvious reasons, and the government doesn’t like it. Reefer madness propaganda starts popping up everywhere and the Marijuana Tax Act of 1937 makes weed illegal at the federal level. The laws don’t bother people too much, though. In the 1960s, a lot of people start smoking a lot of weed. People smoke joints, they hit bowls and bongs, they fire up hookahs, smoke dug-outs, and make apple pipes.

In the mid-’80s, Dominicans, Puerto Ricans, Jamaicans and other immigrants from the Caribbean make their way to New York City. Around that time, the first modern blunt is rolled and smoked. It’s unclear who rolled it, whose idea it was, or whose weed it was. It’s also hard to trace the growth of blunt-smoking from that point on, but it catches on and makes its way into rap culture.

On June 21, 1988, Big Daddy Kane, a Brooklyn-based rapper, releases the album long live the kane. The album features a song called “Raw,” with the line: “Try to front, perpetrating a stunt; When you know that I’ll smoke you up like a blunt.” That same year, Compton rapper King T releases an album called Act a Fool. The album features a song called “Flirt,” with the line: “I diss a stunt after smokin’ a blunt; Catch a real fly girl cause they think I’m a hunk.” This continues, with rappers like Biz Markie, A Tribe Called Quest, Redman, and more rapping about blunts and smoking pot.

Legendary rapper and stoner Snoop Dogg smokes his first blunt in 1993. Well, maybe. Rumor has it he meets Tupac Shakur at the Poetic Justice wrap party and Tupac gives him his first blunt. He later says, however, that Geto Boys rapper Bushwick Bill was the first person to introduce him and a few friends to blunts. Which is true? Your guess is as good as ours. Either is a good story.

Rappers continue to push blunts and weed culture through the ‘90s, reaching parts of America they never thought possible. Head shops start popping up all over the place, selling blunts, blunt wraps, pipes, bongs, and probably blacklight posters to young stoners. Blunt brands like Daddy Rabbit and Wild Willie start cropping up to compete with companies like Swisher Sweets, Backwoods, Dutch Masters, and Phillies with flavored offerings. Pot partakers continue smoking blunts and they make their way into the suburbs.

In the 2000s, Hollywood starts leaning into weed culture like the music industry. How High, starring Method Man and Redman, is released. The film features more blunts than most people will ever smoke in their lives and is packed with laughs. Stoners continue smoking blunts among friends and the industry is booming.

Amid all of this, Academic Cannabis runs a study called “The Cultural/Subcultural Contexts of Marijuana Use at the Turn of the Twenty Century.” It finds that young people imitating hip hop culture were drawn to blunts. It also finds that “the blunt is seen more labor-intensive to roll, but more relaxing once the process of smoking has begun.” If you’ve ever had to wait for someone to roll a blunt (because every group only has that one friend who can do it), you know this to be true.

A few years later, in 2015, another academic study finds that 20% of regular smokers prefer smoking blunts to any other form of smoking. As the years pass, and technology evolves, blunts decrease somewhat in popularity. They’re not what they were when we were in high school, but nothing will ever replace the blunt. Not vape, nor pipe, nor bong, nor fruit. Just ask Snoop Dogg.

Caitlyn Hitt is Daria IRL. Don't take our word for it -- find her on Twitter @nyltiaccc.