The now-viral clip is hard to watch, but impossible to stop watching. 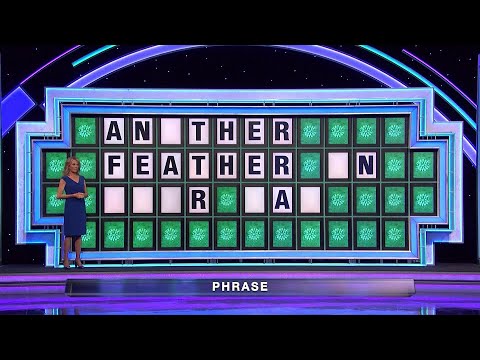 We’ve all had facepalm moments. You know, when something is so obvious, yet for whatever reason, you totally miss it. One of these moments played out on a recent episode of Wheel of Fortune, and the clip is simultaneously hilarious and cringe-inducing.

The now-viral clip (shown above) starts with Wheel of Fortune contestant Laura, who with just four blanks left on the board, attempts to solve the puzzle: "ANOTHER FEATHER _N YO_R _A_." To viewers watching at home, the phrase was clear: "Another feather in your cap." However, when it came time for Laura to complete the phrase, the contestant guessed: "Another feather in your hat."

Okay… that answer is a logical one. But things didn’t stop there. Her answer was met with the incorrect buzzer and the puzzle was tossed to another contestant, Christopher, to solve. To the bewilderment of fans, he confidently guesses the letter "G" in order to finish the phrase. Of course, that was also wrong. Then the third contestant, Thomas, loses his chance to win the game after the wheel lands on bankrupt. It somehow gets worse from here.

After Thomas loses his turn, Laura gets another chance. She guesses, "Another feather in your lap." Nope. Wrong again. At this point, host Pat Sajak comments on the situation, saying, "No, oh the feather is moving around."

The puzzle is again thrown to Christopher who, evidently still unsure of the phrase, spun the wheel landing him $900 and the opportunity to guess another letter. The contestant guessed the letter "D," which, like his previous guess, does not fit into the phrase "Another feather in your cap." Poor Thomas spins a "lose a turn," barring him from taking a crack at ending the chaos yet again.

And it’s back to our girl Laura again. She hesitantly guesses the letter "P" and is met with a positive confirmation by Sajak. Finally equipped with most of the letters in the phrase, Laura attempts to guess again with: "Another feather in your map." This is the point where, we assume, people starting screaming at their screens if they hand't already. Once again the opportunity to solve is thrown to Christopher, who is unfortunately met with the dreaded "bankrupt" sliver of the wheel.

CThomas, who at this point has missed two opportunities to guess the phrase, spins the wheel once again. Thankfully, he guesses the letter "C" completing the very clear phrase: "Another feather in your cap." Thank you, Thomas. Thank you.

The clip which shows several failed guesses and 10 spins has been viewed more than 4 million times on Twitter alone. Users have been left stunned and amused by this seemingly easy puzzle that took so long to answer. One Twitter user even commented, "Anyone else yelling at the TV watching #WheelOfFortune?" Another Twitter user posted a very funny photo of himself seated with a feather in his cap on his lap while reading a map.