What Do Those White Marks on Your Nails Mean? 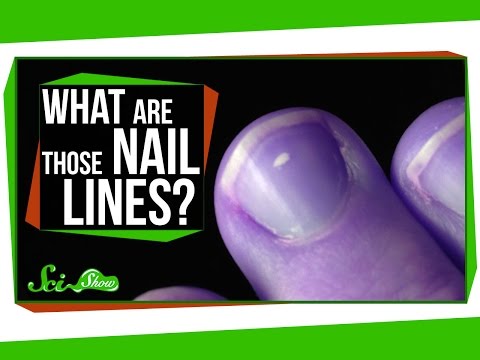 Have you noticed those splotchy white marks in the middle of your nails? They're sometimes there and then sometimes not. They stick around, work their way to the end of the nail, and then you won't see one again for weeks, maybe months.

As SciShow explains above, those little lines or spots are called punctate leukonychia. But since you probably won't tell your friends, "Look at my fingers! I have punctate leukonychia," you should probably use the more colloquial term: milk spots. Though it also sounds weird if you yell, "Hey Dave! Check out my milk spots!"

In general, these spots are nothing to worry about. They're caused by trauma to the nail. Something as minor as banging your hand on the side of a chair could cause them to form. But you probably wouldn't notice or remember what caused the trauma because the milk spot doesn't appear instantly. It forms at the base of the nail and moves toward the tip as the nail grows. That means that by the time it's in the middle of your nail, the trauma that caused it is weeks in the past.

While that's the most common cause of milk spots, there are other causes -- like lead poisoning -- outlined a little more specifically in the video above. Watch that, then check out an older SciShow video explaining all the things your nails can tell you about your health.

Dustin Nelson is a News Writer with Thrillist. He holds a Guinness World Record, but has never met the fingernail lady. He’s written for Sports Illustrated, Men’s Journal, The Rumpus, and other digital wonderlands. Follow him @dlukenelson.
Thrillist TV
History of
Our Newsletter