Here's Why Doughnut Boxes Are Pink

According to an L.A. Times investigation into the history of the pink box, L.A. County has 680 doughnut shops. That's a ton of doughnut shops. It's 200 more than New York City and double the number of shops in Chicago's Cook County. That sweet pastry saturation is dominated by small businesses and was heavily influenced by an influx Cambodian-American immigrants fleeing the Khmer Rouge in the 1970s.

The Times traces the pink box back to Ted Ngoy, who owned many Southern California doughnut shops in the 70s and 80s, long before he lost everything to gambling. He, like many other doughnut purveyors, turned to Westco for supplies. When he came looking for boxes, he asked if there were any boxes cheaper than their standard white cardboard boxes. Westco had pink cardboard leftovers that "formed a 9-by-9-by-4-inch container with four semicircle flaps to fold together."

At least, that's probably how it went. Westco isn't able to confirm which doughnut shop first ordered the pink boxes that perfectly held a dozen doughnuts. However, Ngoy is fairly certain it was him or his business partner Ning Yen. "We doughnut makers were all about saving money," he said. "Why buy the more expensive white? Save a few pennies and make big bucks."

Yen's son thinks it could have been his father, who may have been looking for a red box, which was a lucky color for the refugees.

The prevalence of the pink box appears to boil down to a cost-saving measure. Now, companies like Evergreen sell pink boxes to shops in Arizona and Texas. Widely recognized shops like Portland's Voodoo Doughnut and Minneapolis's Glam Doll Donuts use pink boxes as well. In fact, both of those bakeries don't just have pink boxes but use the color as an overall aesthetic in their shops.

"The Midwest tends to lean on the more muted color scale as far as design goes and we've always felt that color is a powerful marketing tool," Glam Doll Donuts co-owner Arwyn Birch tells Thrillist. "When Teresa [Fox] and I opened the doors almost 5 years ago at our Eat Street location, suddenly the streets were dotted with people carrying our pink boxes. Their color alone was an announcement of our presence in the Minneapolis food scene and has elevated itself to a sort of badge of honor."

It may have started as a cost-saving measure, but many shops keep it going because the box is all about advertising.

Evergreen notes there's increased demand for branded boxes with art, company logos, and social media marketing. That's the case for New York's The Doughnut Project, whose boxes feature the company logo. "It is one of the ways we advertise.  When people bring doughnuts to the office or party, everyone can see where they got the delicious doughnuts," Leslie Polizzotto, co-owner of The Doughnut Project, tell Thrillist.

Even as companies opt for branding, for many doughnut lovers the pink box still induces a drooly Pavlovian response. 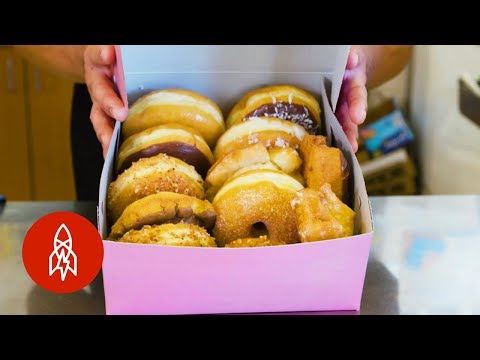