Here's Why Pop Rocks Pop When You Eat Them 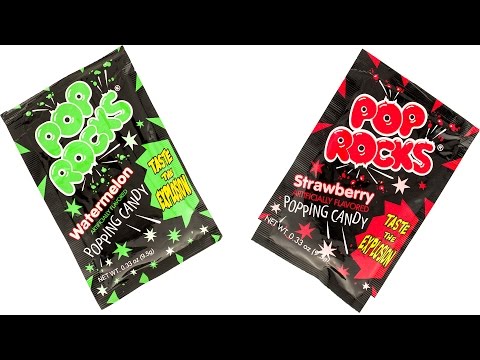 If you've ever dumped half a package of Pop Rocks in your mouth as a kid, chances are you can still clearly remember the glorious crackling and fizzing sensation. But because you were likely popping with your mouth wide open or daring your friends to eat them while drinking soda, you probably never stopped to wonder why they pop in the first place. Thankfully, a new video from Today I Found Out offers a simple explanation of how the classic candy works.

Interestingly, the near-instant popping reaction when the candy hits your tongue isn't caused by a special ingredient in Pop Rocks, but rather the process by which it's made. As the video explains, the ingredients are mixed, heated, and boiled down a syrupy liquid, but instead of being poured into molds to harden like other candies, the Pop Rocks mixture is exposed to pressurized carbon dioxide. Tiny CO2 bubbles become trapped in the mixture, which makes the candy shatter when it hardens and the pressure is released. The release of trapped carbon dioxide trapped in the Pop Rocks is ultimately what causes them to pop and fizz when they're exposed to the heat and moisture in your mouth.

Basically, Pop Rocks are just as cool as you thought they were. For a more detailed breakdown, check out the full video above, which also includes a bonus Pop Rocks fact. And in case you're still wondering about the Pop Rocks and soda myth, there answer is no, the combination won't make your stomach explode.

Tony Merevick is Cities News Editor at Thrillist and hasn't had Pop Rocks in a long, long time. Send news tips to news@thrillist.com and follow him on Twitter @tonymerevick.