Leap Years Exist for a Good Reason. Here's Why We Get an Extra Day.

Existing on February 29 is like putting a dollar in the quarter machine at the arcade and having it spit out five quarters. You're getting an unexpected bonus, a little extension of your time. Kind of.

As you plan what to do with your bonus day this year, you might ask a very reasonable question like, Why is there a leap day? What's the point? That's fair. Fortunately, there's a reasonable answer that won't make you question the very concept of time and the feeling that it's somehow immutable when it's not. (No promises. It might do that to you, but on a smaller scale than, say, a pair of invisible stars bending space-time inside our own galaxy.)

Why is there a leap day?

The 365-day calendar does not account for that extra quarter day. So, once every four years, an extra day is added to the calendar. That realigns the calendar created by humans with the solar year.

A video from James O'Donoghue of the Japanese space agency (JAXA) shows what this looks like. It's not perfectly to scale, but the animation quickly demonstrates why that extra day once every four years keeps our calendars synced up with the planet's orbit.

If we didn't observe leap years, the seasons would drift through the calendar at the rate of about one day every four years. We're talking about large frames of time, but eventually, December would take place during the summer without those leap days. Adding in an occasional extra day aligns our calendar with the astronomical seasons. 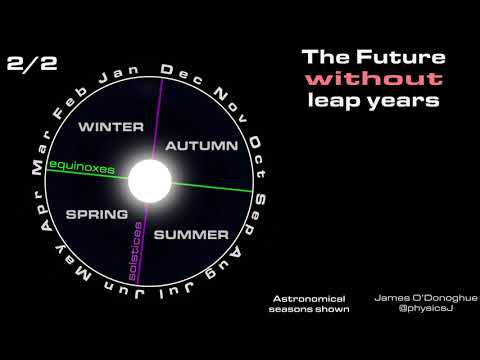 Who created the idea of the leap year?

The leap year was first implemented under Julius Caesar in 46 BC with the guidance of Alexandrian astronomer Sosigenes. This was the Julian Calendar, and it's no longer in use.

NASA explains that in 1582 Pope Gregory XIII refined the Julian Calendar -- with the assistance of German astronomer Christoper Clavius -- adding that leap days should not occur in years ending in "00" unless that year is divisible by 400. That was a necessary tweak because solar years are slightly less than 365.25 days, and omitting these occasional instances of leap years corrects the imbalance. That Gregorian Calendar system is still in use today.

Yes, we're in a leap year. They occur once every four years with the above exceptions. Over the lifetime of pretty much everyone reading this, they have and will happen every four years. The year 2000 was a rare exception to the rule that leap years do not occur in a year ending with "00" because it was a year divisible by 400. It was only the second exception since the implementation of the Gregorian calendar.

With that nugget of knowledge, you now have exactly enough information to explain leap years to your coworkers past the point where their eyes glaze over, and they wonder if you'll ever stop talking. Don't. The relation of time to the cosmos is endlessly fascinating, and you can prove that if you talk just a while longer.