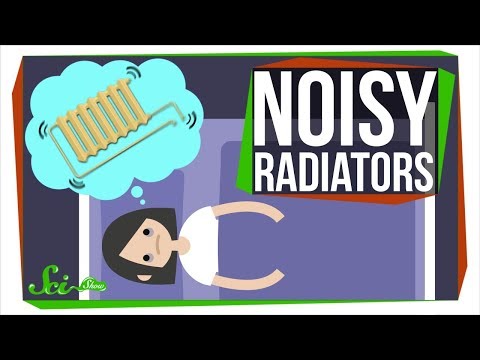 If you've ever had an apartment with radiator heat, you know it can be noisy. There's the standard hissing noise when it's getting going, and the yelps of pain when you lean on it while it's on. But there's also that strange banging noise, as though someone is pounding the pipes with a hammer.

Of course, there's an explanation for that noise, and a new installment of SciShow provides the answer to why your radiator is so annoying.

The explanation starts with the whistling noise radiators sometimes make. The source is the radiator filling with steam and escaping a vent that may be clogged with limescale, which is an accumulation of minerals from the water heated in the boiler.

There are a couple other issues that could be at play, but the most common source of the banging, according to SciShow, is water hitting metal at a high speed. As the steam cools, it turns back into water and should circulate back down to the boiler. If the radiator sits at an angle because of awkward floors or warping, the water may be just sitting in the radiator. Incoming steam will "whip it up and throw it at incredibly high speeds into the radiator's inner walls."

In another scenario, trapped water can make the steam cool and condense rapidly. When that happens, it creates a vacuum inside the radiator. Water is pulled into the empty space and crashes loudly against the inner walls of the radiator. Bonfe notes you may be able to stop the racket by adjusting the pitch of the radiator to angle back toward the boiler.

There are other scenarios that SciShow notes in the video above as well. None of them are ghosts, but you never know. Maybe it's just a disgruntled ghost that wants to bug the hell out of you.

Sign up here for our daily Thrillist email, and get your fix of the best in food/drink/fun.
Dustin Nelson is a News Writer with Thrillist. He holds a Guinness World Record but has never met the fingernail lady. Follow him @dlukenelson.
Thrillist TV
History of
The History of Tailgating