Wine Ice Cream Is Coming and It's Full of Booze

Although you've probably spent more nights on your couch with ice cream and wine than you'd like to admit, living your best life is about to become even easier with what looks to be a food hybrid that actually makes sense: wine ice cream. And yes, it contains just as much alcohol as a glass of actual wine.

It's called Winecream, each bowl contains 10% alcohol by volume, and it could be coming to a store near you -- or perhaps to your doorstep -- sometime in the near future. The Crossroad Company, a family-owned business out of Baltimore, has been serving the boozy desert at festivals and private events since 2014, but its recent expansion to a warehouse space will allow the small business to make Winecream available in more places, including selling it directly to people online. Yes, please.

"We'll be offering pints for sale in stores with alcoholic retail licenses in the Maryland/DC area starting this summer," Katie Gorham, owner and managing member of Crossroad Company, said via email. "[W]e'll be rolling out shipments starting with other Mid-Atlantic states, hopefully sometime in late 2016 (just don't hold me to that!)." And depending on how retail sales go in the DC area, the ice cream could end up in stores in other regions, too, she said.

As explained on the company's website (and in the video below), Crossroad currently makes Winecream to order by flash freezing a mix of wine and cream with liquid nitrogen. This process, they discovered, is the best way to create an ice cream with a sweet flavor while retaining the alcohol in the wine. However, the company doesn't use the typical red and white grape-based wines you're used to, but rather "craft-made fruit wines" in flavors like strawberry, mixed berry, pineapple, and peach. So don't expect to find flavors like Sauvignon Swirl or Rocky Rose anytime soon.

Crossroad's online store currently lists pints of its Chocolate Covered Strawberry and Mixed Berry Winecream flavors for $20 for delivery to addresses Maryland and DC, although both appear to be out of stock as of Thursday afternoon. But with any luck -- and if Crossroad gets its way -- you'll be cradling your own pint of the stuff, on your couch, of course, in no time. 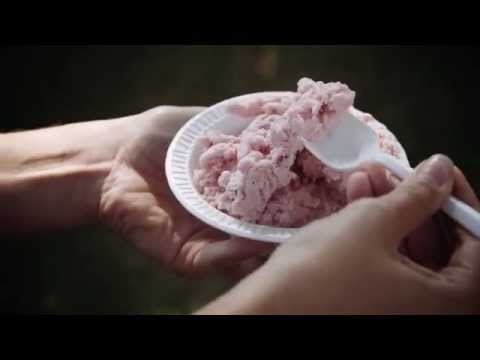 Tony Merevick is Cities News Editor at Thrillist and feels like "wine ice cream" are three words that perfectly describe his typical Friday night. Send news tips to news@thrillist.com and follow him on Twitter @tonymerevick.