The World's Cheesiest Pizza Has 111 Different Types of Cheese 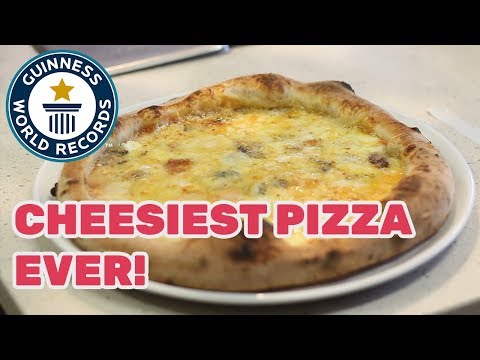 You may think you like cheese, but no one likes cheese as much as the folks who just set the Guinness World Record for greatest variety of cheese on a pizza. The awful and wonderful amount of dairy included 111 varieties of cheese, all melted onto a single blessed circle of dough.

All told, it had a whopping 288.6 grams of cheese, 2.6 grams of each variety. Despite the insane number of ingredients, they managed to make the pizza only a few centimeters larger than the single-cheese pies you know and love. The litany of toppings included both rarer selections and types you probably have in your fridge right now, including mozzarella, Emmental, red Leicester, Comté and Raclette de Chèvre.

The pizza was baked last week in Germany by an American chef at an event organized by pizza.de (a pizza order and delivery service), the Berlin-based Italian restaurant Vadoli, and Assemble Entertainment GmbH.

After the record was confirmed, that pizza and nine others were split up among the extremely lucky guests of the event.

James Chrisman is a News Writer at Thrillist. Send news tips to news@thrillist.com and follow him on Twitter @james_chrisman2.
Thrillist TV
History of
The History of Tailgating