Man Runs Off With 86lb Bucket of Gold Worth $1.6 Million

Whether we'd like to admit it or not, most of us feel a twinge of devious impulse when walking past an open armored car. We don't act on it, of course, but the urge is still there -- which explains why one guy reached into the back of an armored car in NYC's Diamond District and grabbed a five-gallon bucket. A bucket, it turned out, that contained $1.6 million in gold flakes.

The incident occurred back in September, and surveillance footage released by the NYPD captured the whole thing as it unfolded. The man crosses the street, notices the back of the truck is open and unguarded, and decides to make his move -- his move, in this instance, is to grab an 86lb metal bucket and take off down the street with it. You can practically hear Yakety Sax playing while it happens: 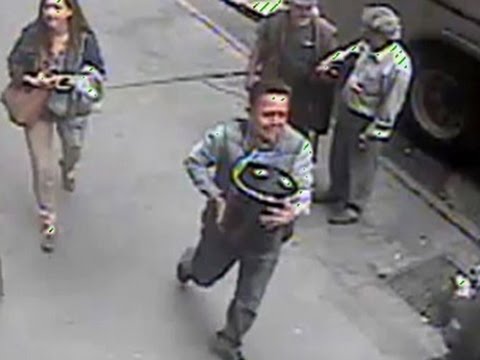 It wasn't just the theft that got captured on video, either: other surveillance cameras followed the man as he ambled down the crowded street in broad daylight, bucket in hand, putting it down briefly to catch his breath before grabbing it again and crossing the street. He continues on like this for about an hour, before disappearing from the camera's eye at 48th Street and 3rd Avenue.

Police suspect this was a crime of opportunity, and while that seems true, it raises an important question: who the hell peers into an armored car and decides to steal a bucket? Yes, it ended up containing over a million dollars worth of gold, but... it's a bucket.

Although he's still at large, detectives believe the unidentified man is currently hiding out in Florida -- presumably in an attempt to fade away into the greater sea of absurd Florida Man crimes.

Gianni Jaccoma is an editor for Thrillist, and he's got $3.25 in gold flakes on him right now. Follow him down the rainbow on Twitter @gjaccoma