At 7:45am on a sunny summer morning last year, I was walking my bike through Washington Square Park. The park was so quiet you could hear the water slapping the surface of the fountain. No one was around. So I dismounted to better enjoy my stroll through the rarely empty New York space. As I neared the southern exit, I realized I was running late for my 8am meeting, so I threw my leg back over my bike and rolled the last ~15ft to the open gate.

That's when I got a ticket for failing to walk my bike the entire length of the park. The officers who issued me the ticket told me they were under a "zero-tolerance" enforcement mandate; the ticket came with no immediate fine, but a mandatory court appearance that, upon appearing, earned me a $100 fee. In paying it, I became one of hundreds cycling New Yorkers to be forced into throwing money at a citation from the NYPD for a non-harmful traffic violation in 2014.

Despite being laughably benign to both myself and society, the behavior for which I was ticketed is technically against the law. But it turns out that the NYPD spent much of last year stopping and fining riders for something that is, explicitly, not illegal: using a phone while on a moving bike, and this bullshit is all too familiar.

The Brooklyn Paper reports today that the borough's 78th Precinct issued 151 tickets for biking while using a cellphone, which according to relevant legislation, isn't technically against the law. How technically? The law specifically applies to "motor vehicles," and while an NY Legal Affairs spokesperson recently claimed that the law applies to bikers as well, it's certainly nowhere in the wording.

So these tickets -- 151 of them, representing god-knows how many man-hours of patrol, paperwork, and processing, all on taxpayer dollars -- are pretty much bullshit.

Reporter Noah Hurowitz spoke with Steve Vaccaro, an attorney widely known in NYC's transit-activist community for being a common-sense dude, who said this chicanery means "hundreds of people are paying money they can ill afford" for something that isn't even against the law.

Should using a phone on your bike be illegal? Vaccaro said “I know of no incidents of this causing serious injury or death [...] Legislation has to be data-driven.” But yes, it probably should. Still, it's straight-up ridiculous for the NYPD to cite people when it's not. And this bullshit happens a lot. 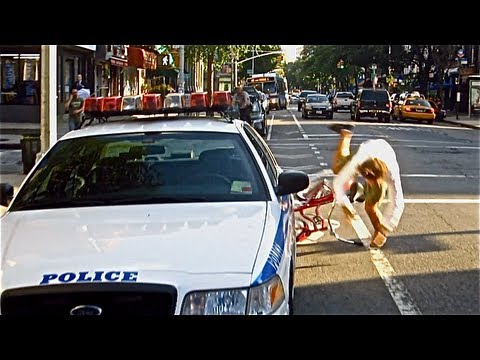 If you're surprised, you probably don't bike very often. The NYPD has a long and checkered modern history of harassing bicyclists for both scofflaw nonsense and downright legal behavior. Like riding outside the bike lane.

NYC bike lanes are infamous for being obstructed by things other than bikes. Tractor trailers, traffic cones, delivery trucks, and double-parked cars are just a few of the things I've personally had to swerve around. In other words, the idea of a cyclist staying within a bike lane 100% of the time isn't only silly -- it's dangerous.

After receiving a bogus ticket for leaving the bike lane, filmmaker Casey Neistat proved this point in his video (14 million views and counting), which shows him crashing a beach cruiser into obstacles within the bike lanes around NYC. At the end, you'll find out an infuriating fact. What he did isn't even illegal. The law states that riders must stay in available bike lanes "except for access, safety, turns, etc."

Fun fact: obstructing a bike lane is illegal, though I've personally never seen a delivery vehicle or double-parked car receive a ticket for it. That's not to say it never happens, I've just got no evidence that it happens. But here's evidence you can't argue with: a photoblog of NYPD vehicles parked in bike lanes, which is very clearly against the law. Y'know, the one they're supposed to be enforcing.

As a result of Vision Zero (the city's heavily scrutinized initiative to reduce traffic fatalities & injuries), the NYPD has also begun targeting cyclists running the light at an empty intersection. Widely known as a "rolling" or "Idaho" stop, this is technically illegal in NYC -- but last year, cops were tackling violators off of their moving bikes.

This, to put it mildly, is fucking terrifying. I haven't been body-checked to the ground yet, but I've seen some videos of it, and in my not-expert medical opinion, it seems to be a much more dangerous maneuver than rolling through a vacant intersection. As the video above shows, the Idaho stop is a beneficial move because it allows you to conserve energy by conserving momentum, which is sort of obvious. More surprising, though, is the fact that Idaho (which employs the law that colloquially bears its name) has a very solid bike safety record. When properly deployed, it's a totally safe behavior.

"Don't break the law and you won't get in trouble." That's the counterargument, right? Well, as demonstrated above (not to mention the recent local and national stories of unwarranted police violence), that doesn't always work. You might still get tackled, or worse.

Helmets: Demanded by Cops, Not by Law

According to some studies, wearing a helmet while bicyling actually puts riders in more danger, because motor vehicles (by far bikes' number-1 danger) see the equipment and are more likely to take risks when passing. Whether you buy the logic or not, NYC law says your decision to wear a helmet is up to you, unless you're under 13, or a commercial cyclist (delivery guy, messenger, etc.)

Of course, that doesn't stop the NYPD from issuing tickets for it.