We Dare You to Eat These 8 Insect Recipes

According to entomophagist Meghan Curry from Bug Vivant, "Two years ago, edible insects were nothing more than an academic idea in the US. Today, this industry is booming, with a new startup joining the 'edible insect industrial complex' just about every week."

Which makes sense! As more and more people become hip to the health and environmental benefits of eating crunchy katydids, we've seen these little critters dipped in edible gold dust, ground up to make the world's next superfood, and featured on elaborate menus. But, for whatever reason, Americans are just not rushing to munch bugs like Timon and Pumbaa, even though Andrew Zimmern thinks we should be. Maybe these eight recipes will change your mind (but also maybe not at all).

The only aphid addition in these is finely ground whole crickets. "Cricket flour in general functions much like nut flours; it has a fantastic earthy nutty aroma and goes especially well with ginger," says Meghan (the same one from earlier!). "Edible insects have a massive range of culinary potential that we are just now beginning to explore." Consider these entry-level. Recipe here.

The lightly toasted weevils are totally optional, but if you're already allowing cricket flour, you might as well go whole hog. Recipe is here!

Eschew carb-loaded croutons and opt for some tasty roasted wax worms instead. Check out the video for step-by-step instructions, if you dare.

Don't have buffalo worms on hand? Just substitute them for mealworms, no problem. You know you're at least curious about this recipe... 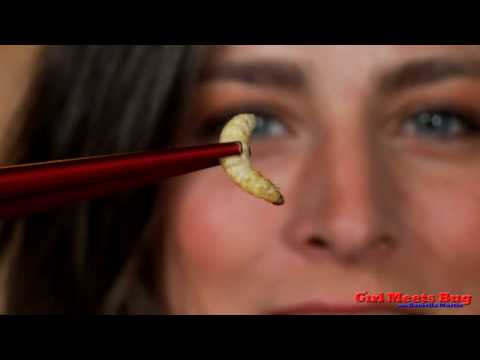 "Edible insects are both our past and our future. Especially with the current interest in 'Paleo' diets, insects make as much sense for us now as they did then: they are nutritious, abundant, and very sustainable to raise," says Girl Meets Bug's Daniella Martin. Just cook 'em hot and fast because they may burst. Recipe here!

For those who want to combine fringe eating habits. Get the recipe here, if you really want it.

Carrie Dennis is an associate editor for Thrillist and is on board with this idea in theory but not in execution. Follow her on Twitter: @CarrrieDennnis.