The Hoodie Heist Explained: Why Your Girl Stole Your Sweatshirt

Sure, it may be juvenile and non-consensual, but so are unsolicited pics of your junk, so let’s call it even. And as author, PhD, and sexologist Dr. Yvonne Fulbright explains, the exchange of wearable possessions isn’t anything new.

“Giving somebody something of yours that is special or of value has long been a part of courting and dating rituals,” she explains. “Movies from the 1950s are well known for men making gestures like giving his girl his Letterman’s jacket, or a gal wearing a guy’s class ring on a chain around her neck.”

While you may not have readily offered up your hoodie, consider this type of theft the highest form of flattery. We stole it from you because we like you. Make sense?

Literally. The double-standard in leisure wear is too real. Guys get hoodies and track pants, girls get bondage-style sports bras and cameltoe-inducing yoga pants. Our bodies are craving something soft and spandex-free. Let us live (and breathe).

When a woman wears a man’s hoodie in public, it can serve as a not so humble brag to the rest of the world that a) she just got some, b) she getting some on the regular and c) whoever she’s getting it from is giving it only to her. Whether or not any of that is actually true, this type of behavior is like a Facebook relationship status change IRL.

Dr. Fulbright explains that it’s “a way of letting others know that you or your mate are ‘taken’ and ‘off the market.” Who knew a ratty and stained hoodie from a D-III college could bare such significant social weight?

Scent can act as a powerful aphrodisiac

When it comes to attraction, one organ plays a vital role. No, not that one -- I’m talking about your shnoz. Because each person has a unique scent, we are biologically programmed to seek out a mate who has a different stink than we do.

Neuroscientist and psychologist Dr. Rachel Herz explains the effect of an assortment of immune system genes that physically manifest in body odor. Altogether, these genes are referred to as Major Histocompatibility Complex, or MHC, and this has a huge effect on how people respond to one another.

When a woman likes the way you (and your hoodie) smells, that’s her body’s way of acknowledging that your offspring would have healthy immune systems. This biological effect can be mimicked or enhanced by other scents, such as cologne.

Scent also has a huge effect on memory

When your girl wears your hoodie, it allows her to connect with you when you’re not around, which can be creepy or cute, depending on how you feel about the situation. Scent can trigger some seriously far away memories because of the way your brain is wired. All smells are processed by the olfactory bulb, which is directly connected to the amygdala, the center in your brain in charge of emotions, emotional behavior, and motivation.

Just a warning: Curve Fragrances for Men might make your hoodie extra stealable.

As any woman who’s dressed up as Tom Cruise from Risky Business knows, menswear as women’s wear has always been a thing. There’s something irreverent and sexy about wearing something that was meant for the boys. Although, the jury’s still out on boyfriend jeans.

Pheromones are totally (sort of) and definitely (maybe) a thing

Pheromones are chemicals animals produce that alter the behavior of the opposite sex of the same species. There haven’t been any human pheromones identified yet, so why hasn’t anyone shut up about them? Eight billion google results can’t all be wrong, right? Right?? 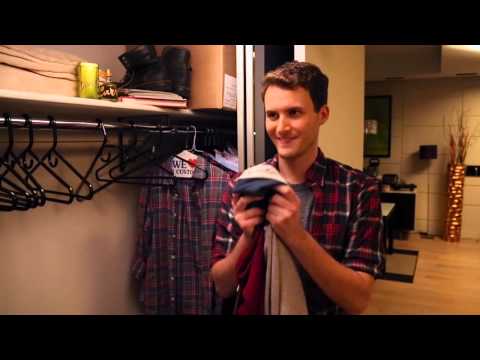 And if we lived in an alternate universe like the one above where phones came with an "I know you stole my hoodie" emoji, you could have a little extra fun trying to get it back.