The iPhone 8 Is Coming. Here's What We Know So Far.

Speculating about future iPhones has snowballed into a cottage industry ever since Apple's first smartphone hit the market nearly a decade ago. The iPhone 7 has been out for mere months, but chatter about the iPhone 8 has been loud and clear since well before then, and hasn't waned. Just this week, The Wall Street Journal reported that the company is testing up to 10 different prototypes for the forthcoming 2017 iPhone.

We lent our ears to a coterie of industry insiders, Apple moles, and patent-application hawks to get a better idea of what Apple might have in store for us. Here are the biggest rumors we've read about so far:

Apple's AirPods were just the first move in the company's quest to rid the world of wires. Several sources, including Bloomberg, have reported that Apple is currently testing wireless charging tech, and that it could very likely appear in the next iPhone. Even better, the cutting-edge tech would allow devices to be recharged from far away -- even from across a room. Perhaps your rat's nest of white charging cables can be repurposed into an avant-garde centerpiece?

In an effort to increase screen size without actually increasing the size of the device, Apple's reportedly ditching the Home button as we know it. Removing it will allow Apple to get rid of the borders at the top and bottom of the screen and finally make way for a display that stretches the full length of the device. In its place, there will likely be a "virtual" home button positioned on the screen, along with a more advanced Touch ID featuring a fingerprint sensor that can read through several layers of the display, and a camera that's integrated into the display.

The introduction of Touch ID on the iPhone 5s ushered in a whole new level of mobile security and convenience, but Apple plans to bump its biometrics integration up a notch or two. One rumor, prompted by a leak from a Chinese chip manufacturer, suggests the next iPhone will feature iris-scanning technology. That means you might be able to unlock your phone, or pay for stuff via Apple Pay, just by looking into a little camera on the screen. Considering Apple's also acquired a number of companies that specialize in facial recognition in recent years, some Wall Street analysts speculate it may also come equipped with face-scanning tech, which would open the door to a whole bunch of new and exciting features and be a huge boon for the advancement of augmented reality. 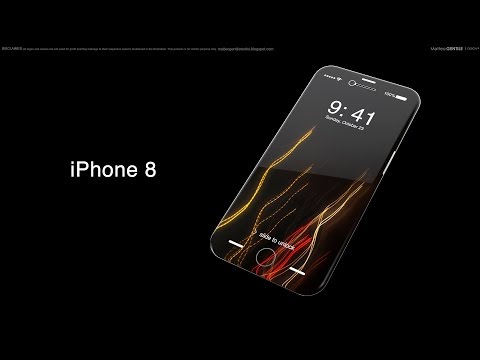 The screen will be curved

The overwhelming majority of iPhone 8 speculators believe it will feature a massive redesign. Most notably, the screen will be "bent" on either side, much like those on the Samsung Galaxy S7 edge or Note7 (RIP). In fact, one report claims that Samsung's own display subsidiary will be making the curved OLED screens out of plastic, seemingly debunking the rumor that both the front and back sides could be covered in glass and connected via a metal frame, much like they were in the iPhone 4 and 4s models. Either way, here's hoping the company somehow manages to make it crack-proof this time.

Images on the screen will pop better than ever

In addition to a bent screen that stretches the full width and length of the device, the next iPhone will feature a much higher-quality display. The Wall Street Journal, among others, has reported that at least one version of the next new phone will forego an LCD screen in favor of an OLED one. This type of screen (organic light-emitting diode) -- which Apple already uses in its watches -- provides much better contrast than an LCD, meaning colors can really pop.

It will be available in three different models

According to several reports, Apple is planning to release three different versions of the iPhone 8. There may be a "premium" model that features a curved OLED screen, and then two others (perhaps in 4.7in and 5.5in sizes) that sport a lesser-quality curved LCD display. Considering the testing of 10 different prototypes though, it's unclear exactly what sizes and configurations will make the final cut.

Joe McGauley is a senior writer for Thrillist. Iris scanning is cool, but so are batteries that don't crap out in a year.