Have you ever wondered what was said in the very first tweet? Or the earliest song ever downloaded? These days it’s second nature to fire off emails and order everything from diapers to donuts online, but the thing Al Gore definitely did not invent was once a very different, desolate, GIF-less place. We tracked down 16 of the most game-changing tech firsts that made the Internet what it is today.

1992
The earliest photo to ever grace the Internet was this shot of Les Horribles Cernettes -- a comedy band based at the CERN laboratory in Switzerland, where Tim Berners-Lee and his team were busy developing the World Wide Web. After rolling out an updated version that could support photos, they tested it out with a backstage shot an IT developer took at one of the band’s performances.

1993
We would've never had the pleasure of deliberating over the perfect away messages, or hearing that distinct sound of friends signing on and offline without AOL Instant Messenger. The first message ever attempted on the platform was sent from Ted Leonsis to his wife: "Don’t be scared... it is me. Love you and miss you." He went on to become the vice chairman of AOL.

2004
While Mark Zuckerberg had the first account, officially, the first non-founder to set up a profile was a buddy of co-founder Chris Hughes named Arie Hasit whose account apparently keeps getting disabled for no reason.

1973
Decades before eBay, Amazon, or the Silk Road would launch, a group of Stanford students using ARPANET (the precursor to the Internet that we know now) facilitated the sale of an undetermined amount of weed to some other students across the country at MIT.

1993
The first foray into the technology what would eventually allow you to chat with random and occasionally clothed strangers around the world happened in a computer lab at the University of Cambridge. The camera was set up in front of the office's communal coffee pot so that people in other parts of the building could check whether the carafe was empty or full before making a potentially pointless trip for a fresh cup. Oh, how far we've come.

2010
Before it was the platform of choice for brunch selfies and overexposed photos of sunsets, before it was even called Instagram, this photo of a golden retriever and a woman’s foot was uploaded by the founder Kevin Systrom. Five years later, there are an average of 80 million photos posted every single day.

1987
The first GIF was created by a team of developers at CompuServe, who considered it to be the best and most versatile image file format around at the time. No one really knows exactly what the first one depicted, but CompuServe's former CTO thinks it was probably a picture of an airplane.

1994
A full five years before you could bootleg "Bawitdaba" on Napster, Geffen Records made a big marketing play by offering the Aerosmith track "Head First" as the first song to ever be offered exclusively via download. Of course, since it was 1994 and connection speeds were slower than death, it took between 60 and 90 minutes for CompuServe users to finish downloading the WAV file and listen to the three-minute and 14-second recording.

The first book ordered on Amazon

1995
The first non-employee purchase on the then-fledgling Amazon.com was the brain-numbingly dull-sounding bookFluid Concepts and Creative Analogies: Computer Models of the Fundamental Mechanisms of Thought, by Douglas Hofstadter. It’s alleged that the Wainwright building on Amazon’s campus was named for that first customer, John Wainwright.

2001
The first surviving recorded edit on the ubiquitous crowd-sourced encyclopedia was the decidedly uncontroversial “This is the new WikiPedia!” on January 15, the day it officially launched. 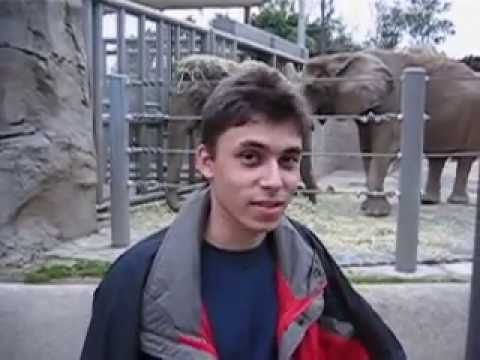 2005
The first video to ever grace the pages of YouTube.com was posted just over 10 years ago and is an unremarkable clip of its co-founder Jawed Karim checking out the elephants at the San Diego Zoo, which he could probably afford to buy outright at this point. To date, it’s racked up nearly 27.4 million views.

1971
You would never know that dull anxious pain that accompanies poring through your overflowing Outlook inbox if it weren’t for Ray Tomlinson, a programmer who sent the first email -- a test message to himself -- back before the Internet was the Internet.

1994
A full four years before Google even launched, WebCrawler was the first search engine to provide full-text search. It changed hands several times over the course of the late ‘90s, but still exists today as a metasearch engine that blends top results from Google and Yahoo.

Joe McGauley is a senior writer for Thrillist. Follow him to glorious GIFs and YouTube videos: @jwmcgauley.