It may not be a real spaceship, but Hugh Hefner was still a fan. 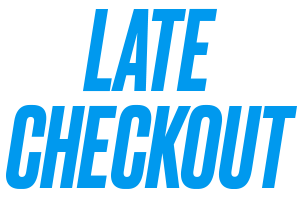 You see a lot of strange things in the California desert, so a 13-foot-tall, flying saucer-like ellipsoid doesn’t seem too out of place—especially here outside of Joshua Tree, not far from Integratron. With oval eyeholes and orange-red sheen, it could be mistaken for one of the giant Burning Man sculptures. But in fact it’s an Airbnb, available for a surprisingly reasonable $211 a night.

This desert oddity known as Area 55 is one of just 68 known Futuro Houses in the world, and the only one in the United States you can spend the night in. If you’re hoping it will beam you up, you’ll be disappointed. But if you’re an architecture buff or looking for a sick Instagram shot, come on down.

Once lauded as revolutionary in the techno-utopian age of the space race, the Futuro House was designed by Finnish architect Matti Suuronen in 1968, one year before the Apollo 11 moon landing. Suuronen conceived it as a portable ski chalet: a prefabricated vacation home easily plopped onto a steep and snowy hill for hassle-free alpine adventures. The rounded top was practical: Snow would just slide right off.

At around 8 feet across and 520 square feet inside, the house offered a tiny kitchen, bathroom, and table. A “fire pod” fireplace facilitated apres ski activities and an electric hatch stood in for the front door. The Futuro’s 16 individual parts were bolted together on site or sometimes transported fully-formed by helicopter, prompting some bewildered onlookers to think they’d just spotted a UFO.

A Futuro manufacturing license was granted to 30 companies around the world, but when the oil crisis hit in 1973 prompting the cost of materials to go up, less than 100 were made.

Today, the ones left standing are meticulously documented on theFuturohouse.com, run by Texas (by way of the UK) resident and Futuro superfan Simon Robson. According to Robson, only one existing Futuro House is occupied full-time as a home: It’s in Houston, Delaware, purchased in 1977 by one Barney Vincelette, “a bit of an eccentric.”

As for the Airbnb in Joshua Tree, it has its own titillating past: Its first residence in 1968 was at the very first Playboy Club Hotel in Lake Geneva Wisconsin, now the Grand Geneva Resort. The Futuro was a big hit on the opulent property, said to be one of Hugh Hefner’s personal favorites (other amenities included a Jack Nicklaus-designed golf course and a cabaret that hosted the likes of Tony Bennett and Liza Minelli).  It even inspired its own Playboy spread.

From there its journey gets murky, with brief stints as a beauty salon, realty office, and possibly a Ford dealership prop before falling into the hands of its current owner, LA-based music producer Ronald Jackson. Jackson spent ten months gutting and rebuilding it to modern glamping standards, complete with a wireless-controlled retractable stairway (though if for some terrifying reason the door malfunctions while you’re out in the middle of the desert, the Airbnb listing mentions an emergency hatch under the rug).

There are Eero Aarnio-inspired ball chairs and movies like Men in Black, Alien, and Star Wars on hand. Outside you’ll find hot showers and private restrooms, plus a spacious kitchen area with a propane grill island and fire pit to cook under the stars.

Since launching in October of 2019 Area 55 has been featured in music videos and countless extraterrestrial-themed Instagram posts, its own Instagram account gaining almost 8500 followers. If you’re not able to book it—which is likely, it’s booked up pretty much always—there’s another Futuro Airbnb in Warrington, New Zealand. Then there’s the ski pod attached to Hotel Tarelka in Dombai, Russia, the only known Futuro still used for its original purpose. Or you can procure your own: London-based artist Craig Barnes is looking for some space to set his turquoise Futuro up for long-term settlement.

But perhaps easier is picking a favorite off the list on theFuturohouse.com and planning a drive-by visit. The one by the pink elephant in Livingston, Illinois, perhaps. Or the conjoined twins in Carlisle, Ohio. Or head to Florida—always your best bet for all things weird—where one sits on a rooftop in Pensacola ready to beam up, and another in Tampa serves as a glow-in-the-dark constellation-adorned VIP room of a strip club named “2001 Odyssey.” That one has some mob history you might want to peruse before popping the Champagne.