Tired of going to games where doing "the Wave" sadly counts as crowd participation? Prefer to drink beer, sing songs with an entire stadium, and then watch hooligans beat the tar out of each for no reason? Good, then you're ready to see a match at one the world's five best soccer stadiums.

5. Allianz Arena, Munich, Germany
Home to two soccer teams (FC Bayern Munich and TSV 1860 München), the entire exterior of this half-a-billion-dollar stadium changes color (thanks to an incredible lighting system) depending on which team's playing -- red for Bayern, blue for TSV. Nicknamed the “inflatable boat" due to its mod design, Allianz holds up to 70,000 (sometimes very angry) Germans, ensuring that -- despite the cool LED lights on the outside -- there's a heated atmosphere within.

Best fan chant:
FC Bayern, Star of the South, you'll never set,
Because we'll stay together in good, like in bad times,
FC Bayern, German Champions, yes that's my football club,
Yes, that's the way it was, it is, and it always will be.

Local food & drink:
Do we even need to fill this section in? Beer. Brats. Oktoberfest. What's not to love about giant steins of suds and women in low-cut dirndls?

While you're there:
Finally find out what the hell "BMW" stands for (Bayerische Motoren Werke!) while learning about Germany’s most famous luxury sports car at the BMW Museum. And read our Thrillist Guide to Munich. You're welcome.

4. The Den, South Bermondsey, England
The Den is home to the notorious Millwall FC club, a team that toils in England’s lower divisions of soccer and is known for its hooligans and rowdy fans. In fact, the stadium's been shut down by soccer authorities repeatedly over the years for bad behavior from supporters, many of whom have even been known to fight each other in massive brawls when there're no other takers.

Local food & drink:The Millwall fan's blood-thirst makes drinking around the stadium risky business, but a few pubs are OK -- if you're wearing the right colors. Check out the Shipwrights Arms or the Barrowboy & Banker.

While you're there:A beer or two is fine, but don’t push your luck around The Den; best to post-game elsewhere in London. Maybe check out the city's 500ft glorified Ferris wheel, the London Eye? Or, maybe, just find a safer pub.

3. Celtic Park, Glasgow, Scotland
Celtic Park is the biggest soccer stadium in Scotland and the famous home of Celtic FC, known as “hoops” for their green and white striped shirts. Celtic’s “Old Firm” matches against bitter rival Rangers FC (considered some of the best in sport, as they date back to 1888 -- they've played a total of 399 times!!), and are deeply rooted in religion -- so at least you know there's no tension.

While you're there:If that rug really didn't tie the room together, make the ultimate Ron Swanson pilgrimage to Lagavulin's Scotch distillery on the Island of Islay. The booze factory is on other side of Scotland from Celtic Park, but you've seen pictures of the Scottish countryside; it's worth the trip.

2. Amsterdam Arena, Amsterdam, Netherlands
We'll forgive the Dutch for trying to brand “Amsterdam ArenA” with a capital "A" at the end of the name, because the 50,000-seat stadium -- home to AFC Ajax -- is one of the best (and loudest) places to see a soccer match. The nosebleed seats make it feel like you could fall straight onto the field, and the fervor of most of the red-and-white-clad fans makes you wonder if they might just throw themselves off in sacrifice.

Best fan chant:
You are my Ajax,
My only Ajax,
You make me happy,
When skies are grey,
You never noticed,
How much I love you,
Please don't take,
My Ajax away.

Local food & drink:
Cannabis coffee shop, anyone? There are about 200 in Amsterdam. Try Abraxas, or the aptly named Smokey.

While you're there:
Amsterdam’s infamous Red Light District is a no-brainer -- you know, if you're into that kind of thing. With sex shops, brothels, and private sex houses, it’s the only place in the world where women're allowed to display their wares to passersby from windows lining the street. Perhaps just window shop? 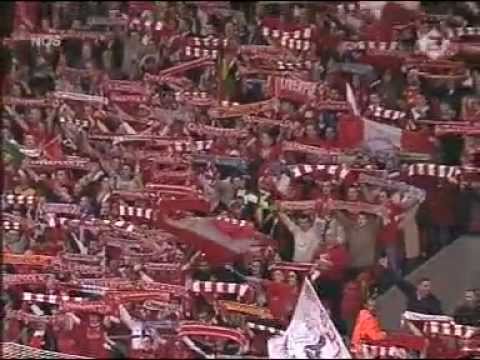 1. Anfield, Liverpool, England
Anfield, home of Liverpool FC in England, tops the list of the best soccer stadiums in the world. Not only does the 130yo arena boast an atmosphere like no other, but “You’ll Never Walk Alone” is perhaps the most iconic crowd song in all of "football".

Local food & drink:
Liverpool is a town of hardworking, blue-collar “lads”. This means there's a pub on every corner, and then some. Try The Albert, or The King Harry.

While you're there:
Liverpool is a cold and wet town in a cold and wet country; despite its location on the water, leave the board shorts and sunscreen at home. Stick to the soccer theme and check out the Liverpool FC Museum before skipping town.