Fun beach fact: at any given time, someone is peeing into the same briny water in which you're having the best Summer day of your life. But if you thought a little pee was the worst thing in there, guess again. Just below the surface lurk some of the world's most bizarre creatures -- some menacing, some harmless, and some that inflict pain simply by being so damn ugly. Here are 14 you should know about.

1. Monkfish
A tadpole with nasty methamphetamine issues? Not really. The monkfish is a species common to the North Atlantic that grows up to five feet in length and has become, thanks to some intrepid French chefs, quite popular in gourmet restaurants — apparently, the tail tastes like lobster.

2. Sea Hare
This slimy, blob of a sea slug grows up to two and a half feet, weighs 30lbs, and protects itself by emitting a bright pink toxic ink, which is only dangerous to humans in extremely large quantities. It also assumes the color of the type of seaweed it's been eating, as camouflage.

3. Mantis Shrimp
This elusive foot-long shrimp found in tropical waters has claws so strong that they can draw blood. Even crazier, it's been said they've broken out of aquariums by smashing themselves into the glass.

4. Angler Fish
If you thought that monkfish was beaten with an ugly stick, check out its deep sea cousin. Seriously, is that a flexible book light growing out of its head? Actually, it's a glowing spine used to lure in small fish, but it's also probably effective for reading. Craziest thing about the Angler: over time, the male will biologically fuse to the female, joining first with their bloodstream before melting completely into their flesh. This cartoon cleverly depicts how it all goes down.

5. Lamprey
Remember that old folk tale about a woman's lady parts that had, ummm, teeth? Well, consider the Lamprey the closest thing to that in real life. Found in almost every body of water (from lakes, to rivers, to oceans), they've been known to suck the life out of other sea creatures but've never attacked a person.

6. Blobfish
A fish whose path you're unlikely to ever cross, the blob swims at depths of 3000ft in the waters off Australia and New Zealand. In addition to winning the title of world’s ugliest animal, it serves as the mascot for the Ugly Animal Preservation Society.

7. Blackfin Grenadier
Discovered in 1885, we have little idea how this foot-long, dorsal-finned monstrosity from the Caribbean came to be, but it kind of looks like a gold fish that's taken too many diet pills, no?

8. Goblin Shark
The Goblin shark is thought to be a living fossil, which makes the fact that one of these rarely seen fish just washed up on the shores of Key West even crazier. It can be found in the Atlantic, Pacific, and Indian Oceans, as well as in the Gulf of Mexico, usually in water deeper than 130 feet. Usually.

9. Viper Fish
What does a fish have to do to score such an intimidating name? How about possess the ability to swim two human body lengths in one second flat (according to some scientists) and flaunt fangs so big that they curve up over the head. The good news is that unless you're doing some deep sea diving, you probably won't see one -- they can hang out as deep as 5000ft.

10. Japanese Spider Crab
You're looking at the largest leg span of any arthropod on planet earth -- a crab that measures 12 feet from claw to claw. No, you do not wanna step on that.

12. Hairy Frogfish
This 9in fish can extend its mouth outward to swallow other fish that are the exact same size. 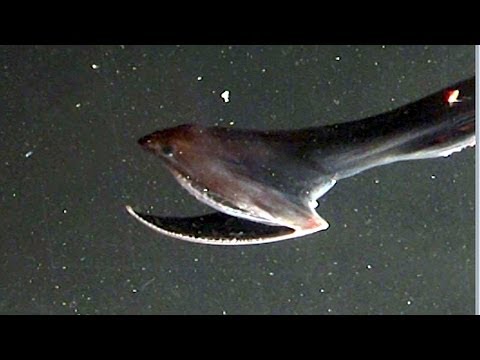 13. Pelican Eel
With a loose-hinged mouth that's way larger than its body, this deep-sea eel seemingly taken from the set of Alien won’t incubate or punch a whole in your stomach, but rather snags its food by swimming through swarms of small crustaceans with its jaws wide open. Grouper eels, as they're also known, are sometimes caught by fishing nets in the Atlantic.

14. Fang-toothed Moray Eel
The always pissed-off-looking Tiger eel, as it's also referred, lives in waters just off the Canary Islands and can grow up to four and half feet in length. Those glasslike teeth come in two rows of inch-long fangs and shorter razors. Don’t mess with this guy, he bites.