About an hour outside of Pittsburgh, the house featured in the horror classic stands as a refurbished ode to the city's greater love of 'Silence of the Lambs.'

When a movie crew was scouting rural Pennsylvanian towns in the late '80s to find the perfect location for a serial killer’s gruesome demise, a long, simple hallway that sealed the deal. It was the ideal setting to transform into a dim, dilapidated corridor for the ultimate game of cat-and-mouse between a psychopath who keeps people in a pit for their skin and a novice FBI agent. “The team could envision the perfect chase scene down this center hallway that runs the whole length of the house, right down to the basement where the final scenes take place,” says Chris Rowan, who now owns this house where Jodie Foster's Agent Clarice Starling fatally shoots Ted Levine's serial killer Jame Gumb — also known as “Buffalo Bill” — in the Silence of the Lambs. During a visit to the property in late September, Rowan points out to visitors the scratches on the front door that are visible when Gumb first opens it to Agent Starling near the end of the film. He’s all about the details.

How did a prop stylist and art director from the New York City metro area come to own a former movie set in Perryopolis, a town in rural southwestern Pennsylvania? Rowan and his wife bought the house in 2020 for $290,000 when everyone was stuck at home and looking for new side projects. He could have tried his hand at sourdough, but after seeing the 1910 home listed for sale on a horror fan website, Rowan says he became “obsessed” with the idea of creating a horror-themed destination instead, down to collectible merchandise that includes hand-made lotion. “If you would have told me I would manufacture and distribute my own line of body lotion that I sell out of a rural Pennsylvania home, I would have said, 'You are bat-shit crazy,' but here we are.” He’s referencing the lotion which Buffalo Bill infamously lowers down a well to his victims, in an effort to soften their skin for his sewing machine.

Long enthralled with the complex psychological thriller, Rowan says he had no idea it was filmed nearly entirely in Pittsburgh until discovering the property. Now he’s running a guest house, tours, and helping fellow Silence aficionados cosplay their dream scenes, just about an hour outside the city. 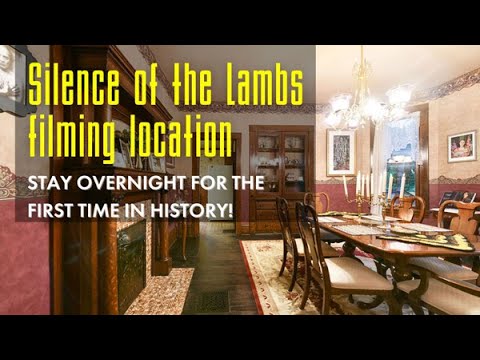 The crew of 1991’s The Silence of the Lambs spent an entire year in Pittsburgh and the surrounding rural areas. The entire region fueled their creativity, Karen O’Hara, the prop stylist for the movie, told Thrillist.

When director Jonathan Demme and production designer Kristi Zea scouted the area in 1989, the vision within the unusual script came to life. “Kristi saw a man who raised pigeons in Glenwillard. We used that idea for Frederica Bimmel’s father. We found the Edward Check Funeral Home on a long drive out to Mckeesport looking for tools and tables we could rent for the Gumb basement.” The green-tiled room at that funeral home became the exam room where the agents first find a death’s head hawkmoth in a victim’s throat. The house now memorializes this moth with artwork as well as several actual specimens – many sent in by fans.

It’s not just Buffalo Bill’s House that fans come to southwestern Pennsylvania for. Each Halloween season, the Soldiers & Sailor’s Memorial Hall in Pittsburgh holds a Silence of the Lambs-themed event. The large freestanding cage where they attempt to contain Dr. Hannibal Lecter was replicated by the local horror company Hundred Acres Manor and erected in the cavernous hall, which was also the location of his bloody escape scene. “People come in every month of the year from all over the country with an interest in seeing where the movie was filmed, says Amber McBride, the Vice President and director of rentals & events at the hall. “Even at a wedding or concert, there’s often someone inquiring about where the movie was filmed.”

This ongoing interest spawned the idea of a dedicated event at the university's hall, which changes every fall as more horror fans become a part of the festivities. “This annual event is like a family reunion that grows a little bit each year,” says McBride. Rowanparticipates, of course – along with many others who come to screen the movie and pay homage. A fan donated what is believed to be the original rug from the cage. Her mother purchased the rug used, and the shop owner shared that the set decorators had rented it for the film. The movie’s metal fabricator, a local man named Joe Steinmetz, provides the actual blueprints he used to make the cell for the movie.

Alongside dedicated movie experiences like Bill’s house or the hall, the city is rife with memories of Silence scenes. Some spots around the city just have a history — and everyone knows it. When Heather LeVeck and her husband lived in the Bradford Court Apartments, fellow residents let them know that the scene depicting Buffalo Bill’s abduction of Catherine Martin was filmed at their very own home, right by the dumpsters. “Every time my husband took the trash out, I'd warn, ‘Watch out for cannibals.’"

Minutes away, visitors to the quiet stacks of the Carnegie Library in Pittsburgh’s Oakland neighborhood will recognize the setting where an entomologist first identifies the death’s head hawkmoth for Agent Starling. This living cinematographic history in the region is part of why Rowan knew Buffalo Bill’s House could become a tourist destination unlike any other.

Visitors pulling up to Buffalo Bill’s house for their stay might be surprised at just how normal the setting is. The four-bedroom home sits on a large lot bordered by railroad tracks and the Youghiogheny River. The wraparound porch feels idyllic; peaceful. The unassuming setting for the house was part of its draw, says O’Hara. Gumb was running his house of horrors in Smalltown, USA. It could have been anyone’s neighbor.

“Kristi and I walked through exactly like Clarice would. We scared ourselves when we opened the bathroom door just past the furnace and hot water heaters,” says O’Hara. “You see a dead woman in the bathtub. Makeup artist Carl Fullerton made that amazing creature as well as the skins in Jamie’s workshop. Everything in that basement was gathered from stores and flea markets around Pittsburgh.”

O’Hara and her team worked tirelessly to amass the perfect props, but little remained from the movie when Rowan took over the house. It was a family home in the late '80s and '90s — the parents and their 6-year-old lived upstairs during filming — and it remained a residence until 2020. Upon purchasing the home, Rowan began the exhaustive-but-exciting process of bringing his vision to life. More AirBnB than actual B&B, Rowan designed the home to be rented by one group at a time. He’s collected fan art, commissioned custom bedding and decor, and fleshed out (pun intended) a fully immersive experience.

The main floor hasn’t changed much. The buffet where Bill rifles for a business card before bolting for his basement lair is now filled with movie memorabilia, and prop firearms are scattered throughout for guests who want to stage the showdown between good and evil. Mostly though, it’s a comfortable and functional space.

The four upstairs bedrooms, which were not featured in the movie, are packed with details. A sign above the toilet reminds guests to rub the lotion on their skin. The third floor has been transformed into Buffalo Bill’s Playroom, complete with antique arcade games, a pool table, and vast shelves of horror movies — Rowan’s own personal collection. “Many visitors actually choose to watch the movie while staying here,” he says. 'For all of the eerie memorabilia, the house feels oddly livable. It’s a turn-of-the-century Victorian classic with gorgeous, intricate woodwork and huge windows overlooking the river and mountains. The front porch beckons guests to curl up with a good book. The large dining room is made to be filled with laughter over shared meals.

Rowan’s pièce de résistance, though, is the basement.

In the movie, it’s the setting of Bill’s workshop. The upstairs is a ramshackle mess of clutter, but the basement is where he can be his true self. When guests stumble down the stairs from the kitchen, a motion sensor trips as Rowan begins to set the scene. He’s good at this — it's his job, after all.

“Goodbye Horses” by Q Lazzarus plays, just as in the film, as guests are beckoned into the workshop. Sewing machines, dress forms and patterns, and the preserved head of Bill’s first victim in a bucket are staged throughout the space while a disco ball spins. They’re free to try on the outfits, pose at the sewing machine — touch and explore everything.

Bill keeps his victims in a basement well. That’s one part of the set that was never actually in this home — it was inspired by a well in the property's yard, but was created in a soundstage. From the moment Rowan acquired the house, he knew he would recreate the well in the basement. “Bill’s house wouldn’t be complete without it,” he says.

He enlisted the skill of local-but-world-famous special effects and makeup artist, Tom Savini. He runs a special effects school in a nearby town, and he and his students worked closely with Rowan to make a perfect (though shallower) replica of the well for photo opportunities. Even the bloody scratches on the walls created during desperate escape attempts are visible. “This is the type of project our school loves to be part of, paying homage to a film masterpiece like Silence,” says Savini.

Interested in a stay or tour of Buffalo Bill’s House? Rowan says the home is for everyone. “We really do get all walks of life. We’ve had quite a few families come through. Despite the subject matter of the film, there's nothing within the house that is off color for younger eyes. We’ve had romantic getaway weekends, hosted a few bachelorette parties, and had guests from as far away as Germany, Denmark, and the UK. We’ve even had a honeymoon.” There’s one thing they haven’t hosted yet, though – a wedding. “We’ve had some interest,” Rowan says. “It’ll happen.”