Watch This Bison Annihilate a Parked Car in Yellowstone

Why did the bison cross the road?

On a drive near Yellowstone National Park's Lamar Valley last week, Tom Carter parked his SUV on a relatively empty road, save for a few vehicles and a herd of bison running in the distance. Carter filmed the bison as they charged down the road toward his car. And neared, they were clearly pissed and did what bison do: headbutt the hell of out something. Namely, Carter's car.

“Don’t run into our car,” Carter said in the video. But of course, it was too late. Nobody was injured on impact, but the same could not be said for the SUV.

"According to AAA Insurance, damage to the car totaled $2,787.82," Carter wrote in the video description on YouTube, before adding: "That's more than a dollar per pound of the 2,000 pound bison!"

By Carter's account, other tourists in a car spooked the animals, which led to the collisions.

"Never harass wild animals. Once aroused, give them time and space to calm down. Never chase wild animals!" 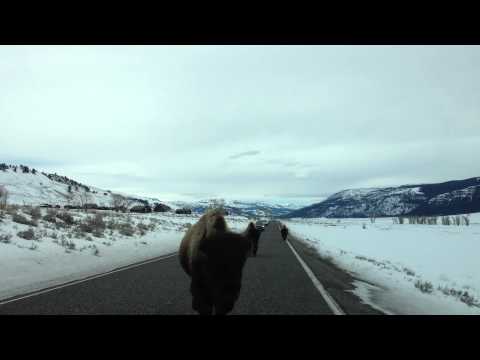 Unfortunately, no one was able to get hold of the bison's details after the incident.