This video proves your stuff isn't safe in your hotel room

Remember that scene in Maid in Manhattan when Jennifer Lopez tries on a guest's dress instead of cleaning her hotel room, and then basically steals her identity to date Ralph Fiennes?

No? Of course not. Well, if you did (wink, wink), then you'd probably be like, "No way, this real life-imitating-art story sounds exactly like that movie with Jennifer Lopez I totally didn't see on cable while turning on the game".

Last Wednesday, a housekeeper at an unnamed US hotel went through a guest’s stuff while he was away from his room. Just like the movie. And it was all captured on video! 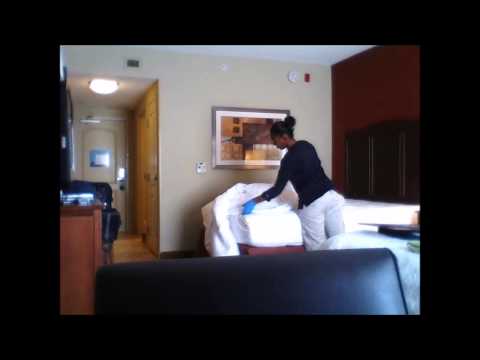 Yep, YouTube user Vince Stravix caught the nosey maid on camera as she peeked at his luggage before trying to use his laptop and tablet to email, you guessed it -- Ralph Fiennes!!! JK! That'd be nuts, right? She does occasionally take a break from spying to do her job, throwing out used towels and making the bed.

Thankfully she didn’t steal anything, although she obviously could have. And Stravix's video should serve as a reminder to travelers everywhere that belongings are not always safe when we leave them unguarded in hotel rooms. Especially if Ralph Fiennes is around. Remember: if you don't already, lock your damn stuff in the hotel safe.