Where every football fan'll be this weekend

12 reasons to go to Knoxville for Saturday's Georgia-Tennessee game

Despite the fact that Trinity is fresh off a huge win over Williams, don't get sucked into spending your Saturday tailgating in Hartford when you can make a pilgrimage to watch one of the SEC's most underrated rivalries instead. The 6th-ranked Georgia Bulldogs are rolling into Knoxville this weekend -- a town every college football fan should visit -- and it's not too late to go. Here are 12 reasons why you should gas up the Subbie and hit the road

1. With Lane Kiffin finally getting the axe from USC last week (somebody find that man a high school coaching job), the Vol faithful should be in especially festive spirits

2.Every college football fan should see at least one game at Neyland Stadium. Built in 1921 and boasting a capacity of 102,455, it's the largest stadium in the SEC and third largest in the country, behind Michigan and Penn State. It's enclosed and loud; plus, Neyland sits on the banks of the Tennessee River, and is set against the backdrop of the Great Smokey Mountains, so the views are stunning.

3. Coming off a hard-fought win over LSU last weekend, the Dawgs could be primed for a big let-down game. Emphasis on "could". Remember, a #5 UGA barely hung on last year at home against UT in a 51-44 shootout that went down to the wire. Yes, different Vol offense, but if they're able to pull off the upset, Knox Vegas is going to go absolutely bat$h!t. And you'll be glad you were there.

4. Absolutely stating the obvious here but, ummm, have you seen the coeds at Georgia or Tennessee? Good Lord.

5. Suttree's High Gravity Tavern. Yep, this downtown beer bar specializes in high-ABV and craft suds. Plan on stopping in before and after the game.

6. You'll finally have an opportunity to pick up that elusive coonskin cap you've been pining to add to your new Fall wardrobe.

7. Despite the fact that TN orange is actually the color of a daisy once prominent around campus (isn't that sweet), seeing an entire sea of orange-clad fans is admittedly impressive.

8. Speaking of colors, the Vols are breaking out new Smokey Gray Adidas unis this weekend. Not entirely sure this is a selling point, but consider yourself informed. 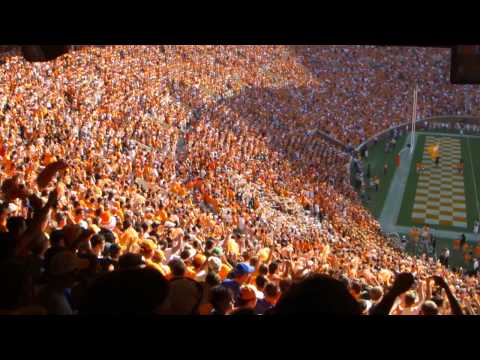 9. Not only will you hear about a hundred versions of Rocky Top (wait, there's a Daniel Bedingfield dance remix?), but when 100,000 fans sing along -- you will get chills. It's guaranteed. Even if you hate the song. And people from Tennessee.

10. Two words: Vol Navy. If you thought tailgating in a parking lot was fun, how about drinking on the water? 200 plus boats make their way up the aforementioned Tennessee River and dock outside the stadium in one of college football's two floating tailgate parties (the other being at UW on Lake Washington).

11. Dog mascots. Both schools have them on the sidelines; UT's Smokey IX is a Bluetick Coonhound, while Georgia's Uga IX is an English Bulldog whose dog family has filled the mascot roll since 1958. Again, not necessarily a plus or minus, but something you should consider.

12. Finally, you will most certainly witness Georgia's QB Aaron Murray become the SEC's all-time leader in passing yards, as he only needs 99 to eclipse former Dawg David Greene's SEC record of 11,528 yards. Put it in the books.

Tickets: Are still available? Score seats from the University here, or head over to Stubhub.

Accommodation: Oliver Hotel. Just because you're going to a football game doesn't mean you can't stay in style; this boutique hotel was built in a renovated 1876 bakery, and is right in the heart of town.

Bars & restos: In addition to Suttree's, plan on grabbing some ribs at Calhoun's and a bottle of brew (they've got over 160 varities) either pre- or post-game at dive bar the Back Door Tavern.

Non-football stuff to do: Assuming you're not inclined to pay a visit to the Women's Basketball Hall of Fame (No? No interest?), hop aboard the historic steam locomotive Three Rivers Rambler instead for a scenic 90min train ride along the Tennessee River.