The Greatest Winter Travel Bucket List of All Time

If summer's the most overrated season of the year (which it is, we all know this), then it stands to reason that winter would be the most underrated season, right? Right? Of course, it is. The problem with winter isn't the snow, subzero temps, or bone-chilling winds -- it's everybody's lousy attitude and predisposed belief that the season just inherently sucks. They won't shut up about it.

The key to surviving (if not, straight up, enjoying) the winter, though, is to embrace it, and all the iconic cold-weather pastimes it has to offer; activities that many of us have foolishly been missing out on.

Well, that ends today. Turn your SAD sunlamp off and throw on your puffy coat, because it's time to start crossing some items off this ultimate winter bucket list.

Spend a night in an ice hotel

Nothing says winter quite like a hotel made entirely out of ice. From Hotel de Glace in Canada to ICEHOTEL in Sweden, these structures are painstakingly rebuilt every year and feature different hand-carved designs and embellishments in each room. Layers are the name of the game when it comes to staying warm at night, as indoor temps often hover around 25 degrees Fahrenheit; you know, since you're sleeping inside an ice cube.

Every winter, wild Japanese Macaques come down from the wilderness to bathe in Jigokudani Monkey Park's artificial hot spring. These guys are the northernmost-living breed of primate in existence (except for humans), and the manmade onsen (hot spring) was built specifically for them back in 1964. Seriously, just look at this little dude cutting loose and tell us you don't want to go to Japan.

Make like the monkeys by finding a hot spring of your own. This Icelandic healing spring stays between 98 and 102 degrees Fahrenheit year-round, but since the cold winter months draw a smaller crowd, you'll be able to appreciate the spring's restorative qualities in relative peace and quiet. Also, there's a swim-up bar. 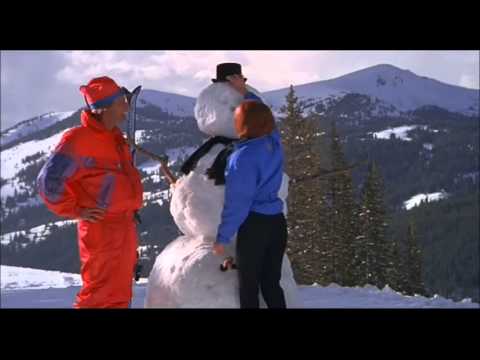 Building a snowman is a cherished childhood experience, up there with making snow angels and snowball fights. Which makes it all the more satisfying, now that you're an adult, to stray from the traditional "corncob pipe" motif and stick that carrot where you always knew it should've gone. 10-year-old you would be proud.

Sip scotch by a wood-burning fireplace

Sure, gas fireplaces are more energy efficient, cleaner, and better for the environment, but when it comes to cold-weather comfort and ambiance, nothing beats torching a few logs in the living room. Take the crackling sounds, the burning smell, and the ability to legitimately brandish a cast iron poker, add your favorite beverage and perhaps a special lady companion, and we're no longer having a conversation about this.

With some close friends and a few handles of your favorite bourbon, ice fishing goes from the world's most painfully boring activity to a turbo charged, manly activity that you'll still have to explain the merits of to anybody who didn't grow up in Minnesota.

Every winter, people around the world strip down to their skivvies at the beach and make like it's still summertime by diving into the ice-cold water. Some do it for charity, some for fun, some just to shamelessly show off their sexy beach bodies in February (come on, don't you ever stop working out), but whatever the reason, the feeling of being immersed in frigid water is memorable enough that you'll never complain about a 40-degree day again.

Ride on a dog sled

You don't have to be a dog lover to appreciate tearing through frozen wasteland on a sled pulled by a team of huskies, but it definitely helps. Even better, you don't have to go all the way to Alaska to get your Call of the Wild on: dog sledding tours are pretty much available throughout the northern United States, from Oregon to Maine. Basically anywhere there's snow, dogs, and Cuba Gooding Jr.

Go on a snowmobile adventure

Unless you're a researcher in Antarctica or a Bond villain's henchman, riding a snowmobile's probably not a part of your daily routine. This needs to change, immediately, because not only is tooling around on a snowmobile essentially the modern equivalent of the aforementioned dog sledding, but it's a crap-ton of fun. And it should be the next thing you cross off your list after going back to the gym to look good for the polar bear plunge.

Do a shotski with complete strangers

We've all done a round of shots at 3.58am with a weirdo in a viking hat, but there's something different about the communal experience of taking a shot off a ski with a bunch of other people. It's a team effort, which makes it almost like a sport, which essentially means you're exercising, so in reality doing a shotski is probably really healthy for you.

Write your name in the snow

Anyone who grew up around snow definitely did this hundreds of times, but for the millions of Americans living below the Frost Belt, leaving your signature on fresh powder is something done exclusively in movies and Canada. This year, if you happen to find yourself outside after a snowstorm, take a second and really try to improve your penmanship.

Remember that 2ft-high wall of snow you so proudly built on the front lawn when you were 10? Well, now you're an adult with access to YouTube tutorials, there's nothing stopping you from constructing a next-level Hoth System-esque fort complete with multiple levels, battlements, and a network of tunnels that's totally unnecessary.

If you've ever wondered what happens to waterfalls in the winter, the answer is they become breathtaking, terrifying ice ladders that you can use to climb up a mountain. Grading ranges from W1 (not at all steep) to W17 (oh God, I'm upside down), but even a beginner-level incline can be tense and exhilarating. Plus: 10 points if you quote Chris O'Donnell from Vertical Limit. Minus: 1,000 points if you've actually seen Vertical Limit to the end.

Gianni Jaccoma is an editorial assistant for Thrillist Travel, and he’s still bummed his “summertime cat sled” idea never took off. Follow him on Twitter for winter penmanship tips @gjaccoma.