Every Question You've Ever Had About Flying, Answered by a Pilot

Let's just put it right out there: Flying is a king-sized pain in the ass.

The cramped seats, the recycled air, the turbulence, the mysterious loud noises, and whaaaaaaaaaaaaaat's the deal with the food? If you identify with the 20% of Americans that get royally freaked out when they fly, you know there's little one can do or say to quell the anxiety associated with being tens of thousands of feet in the air.

Determined to conquer my own personal fear, I sought out Tom Bunn -- an experienced airline captain and licensed therapist who's specialized in the treatment of fear of flying for over 30 years. We sat down for 30 minutes and went over every single ridiculous thought that goes through your mind as you wait out the 90-minute delay before takeoff.

First and foremost, will my plane crash?

Tom Bunn: No. Crashes happen when something goes wrong. And for everything that you need to fly a plane, the plane has two, three, or four of them. The wings can't break, so you only need two of 'em. But, for hydraulics, there's a backup to the main system, and a backup for the backup. For navigation, you have the same thing -- the primary system, your backup system, and another system behind that. So, you don't just run out of what you need. That's why we don't have planes crashing in the US. We haven't had a fatality on a US-certificated scheduled airline since 2009.

Will turbulence ever bring down a plane?

Bunn: I would say no, but there was one plane brought down by turbulence back in the beginning of the jet era. A British Overseas Airways plane was making a sightseeing pass of Mount Fuji and there was a very strong jet stream going by Mount Fuji -- and it's a very uniquely shaped mountain -- and they got into a turbulence situation that broke the plane apart. Basically, the learning experience there is, don't go sightseeing near Mount Fuji. We haven't had any further planes taken down by turbulence.

What happens if one engine goes out?

But what if both go out?

Bunn: Then you become a glider. There was a case many years ago, in Canada, with a 767 when both engines went out. Air Canada had some problems with their fuel gauges -- and this was in that period of time when the English-speaking people and the French-speaking people weren't getting along too well. They planned the flight using metric measure, but used English measure when they fueled the plane, so they only had half as much fuel as they thought. So they're flying along and it gets very quiet -- the engines quit. They found an airport; only problem was, the airport had been closed and was being used as a drag strip. Didn't take very long for the people drag racing to realize something was wrong and they got the hell off the drag strip.

Bunn: Probably. If an airline cuts corners long enough, their luck will run out. For example, ValuJet was praised by Wall Street because of extreme cost-cutting that led to high profits. But, cost-cutting played a role in the 1996 crash into the Everglades. Cheaper tickets are possible only via cost-cutting. Cost-cutting can rarely be done without reducing the safety margin.

How can you tell if your pilot is a rookie?

Bunn: If you are flying on a major airline, you are not going to encounter any rookie pilots. Even at regional airlines, new pilots are required now to have 1,500 hours of flight experience before being hired. Because so much training is now done in simulators, younger pilots have more experience with abnormal and emergency situations than veteran pilots did years ago before simulators came into use.

What kinds of situations are pilots most afraid of?

Bunn: I don't know... not much. Airplanes have gotten so safe, there's really nothing to worry about. There's the concern that something might happen that you can't handle. You have a sense of responsibility that you have hundreds of lives you're taking care of. I think the main problem pilots worry about is that they will somehow fail.

What about if a bullet is shot through the fuselage?

Bunn: First, what would it not do: It would not cause the plane to come apart. The fuselage penetration area would not spread enough to threaten the plane. For the plane to be threatened, the bullet would have to damage a hydraulic system or an electrical system. Yet, even in that case, the plane should be alright, due to those backup systems and the backups' backups.

What if the landing gear failed?

Bunn: The first level of failure would be that the gear does not indicate 'down and locked' when the pilots attempt to extend it with the gear handle. Using the gear handle, hydraulic pressure moves the gear down and locks it. If that doesn't work, the pilots unlock the 'uplocks,' which are the latches that keep the gear stowed in the up position during flight. After unlocking the 'uplocks,' gravity can extend the gear.

What is the scariest situation you've been in?

Bunn: None when flying for the airlines. Lots when flying fighters in the Air Force. Airline flying is boring, and the pilot's job is to keep it that way.

Have you ever flown through the Bermuda Triangle? 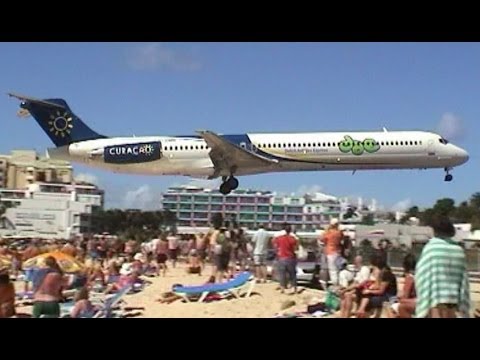 Sketchiest airport to land in?

Bunn: Lots of competition for this. Which ones to consider may depend upon how likely a passenger is to encounter that airport. Some sketchy airports aren't used much. As to frequently used airports, the ones I think are interesting:

Is it safe to fly during a thunderstorm?

How do you land a plane when there's no visibility?

Bunn: Well, you can land on instruments alone in what's called a Category Three landing, because the instruments in the cockpit are so accurate -- and they're all backed up. For example, with a 747, there are three autopilots and there are three ILS receivers, so when you do a Category III landing with a 747, you can sync up all three autopilots and all three have computers inside that all have to agree on what you should do to put the plane on the runway. If there's any disagreement, a light comes on and you can't do the landing. When you have a Category III landing with no visibility, you, as the pilot, don't see the runway until the wheels touch the runway. The plane lands itself, slows itself down, and stops itself by itself.

What happens when lightning hits a plane?

Bunn: Not much. The statistics are really interesting. The average airplane gets hit twice a year. In the cockpit you hear a "bang" and you see a flash. Here's what you don't know -- you don't know if it's static discharge or lightning until you land. When an airplane flies through clouds, it picks up static electricity. When you get on the ground and if there are marks on the wing or nose, which looks like a cigarette burn, then you'll know it was lightning.

If a window broke, would you get sucked out?

Bunn: In the cabin, there are two windows. One is structural, one is there to keep your hands off the structural one. It's Plexiglas, and it's just not going to break. The cockpit glass is not Plexiglas, it's actually glass, but very strong glass. The glass is actually heated -- if the heating system malfunctions, you could have a fracture of the cockpit glass. Once again, pretty rare.

What if there were something on the wing?

Bunn: You know, I haven't met many people who've seen that other than in The Twilight Zone. But people do see things, and they're afraid they're the only people who've seen it. For example, under certain conditions, you'll get some vapor along the wings that looks like fog. And it will just pop up and go away.

What happens if you leave your phone on during takeoff?

Bunn: Nothing. It doesn't matter, it never did. This was the FAA covering their ass. The FAA did not want to get into the business of testing every electronic device that could have possibly caused a problem. I guess it was smart, because if a plane went down and some lawyers sued the FAA saying it was because of an electronic device, they could have potentially tried to blame them, so the FAA just said you can't use them. They were never a threat, they don't operate on frequencies similar to the frequencies used in aviation.

How long after takeoff should we worry about birds?

Bunn: Something like three or four minutes. Usually you get up to the area above where you have to deal with geese in under five minutes.

Safest season to fly in?

Bunn: It doesn't matter much. In summer, passengers encounter more turbulence associated with storms. In winter, storms do not build up vertically to cruise altitude. Overall, then, a bumpier ride is more likely in summer than in winter. Though a bumpy ride isn't unsafe, many passengers feel unsafe when the ride gets rough.

Is it safer to fly at night?

Bunn: I think flying at night is just easier for pilots. At night, you can see the lights of other airplanes when they're 50 or 80 miles away. You can also pick up the runway lights a lot easier than in the daytime. You can pick up thunderstorms visually 200 miles away -- just because there's lighting. Plus, when you're headed west, you don't have the sun in your face.

Could you fly a plane upside down to avert a crash?

Bunn: Not with an airline. I think there was a movie like that that was inspired in part by that Alaska Airlines crash -- must've been 20 years ago -- where they had a failure in the tail, weren't able to adjust the nose up or down, and had to turn the plane upside down to bring the nose up. And it worked, but not enough that they could manage, so they crashed in the Pacific.

What happens if both the pilot and co-pilot die?

Bunn: Well, then you don't have anybody as a backup, unless you have some crew members that are deadheading. But I don't think that's ever happened…

Bunn: Sometimes when you're working for an airline, they need to position a pilot somewhere. They don't need you to pilot the airplane, they just need to get you someplace to operate a plane. It's a term back from railroad days; they talk about an engine pulling a train and then you have a second engine that's just being hauled along to be used on another train.

How would a crew respond to snakes on a plane?

Bunn: You know, that actually did happen. I don't know what airline for sure, but I think it was PanAm in Africa. They were shipping some snakes in the cargo hold and they got out and started going through the air-conditioning ducts. The story I heard was that the crew were trying to find things to smack the snakes with. That was a long time ago, but it really did happen.

Jeremy Glass is a Thrillist contributor who always knew, deep down, that Snakes on a Plane was real.