Experience swanky vintage Las Vegas in the penthouse at the El Cortez. 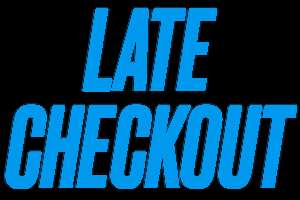 There’s a clunky, very vintage-looking Unisonic video intercom system outside the 15th-floor penthouse in Downtown Las Vegas’s El Cortez Hotel. Ring the intercom’s loud doorbell, step inside, and you’ll realize it even works: You can actually see into the hallway through a very grainy black and white closed-circuit TV, retro tech at its goofiest. Once you’re in the suite’s foyer, you’ll see a set of interior doors complete with custom oversized “JG” door pulls. You might ponder the initials for a moment, but if you’ve booked this suite, you probably already know what they stand for. After all, the penthouse’s former resident is likely the reason you’re here—to live like the late and legendary casino magnate Jackie Gaughan.

When Gaughan moved to Las Vegas in 1950, the city wasn’t anywhere near as glamorous as it is today. The future desert hotspot only had about 25,000 residents, a smattering of casinos, and Frank Sinatra was about a year out from playing his first Vegas show. Still, Gaughan—a one-time Omaha bookmaker—saw promise in the city and its gambling future. He bought a 3% stake in the Flamingo, then another 3% in the Boulder Club, and just a decade later opened his own casino, the Las Vegas Club. Many more casinos would pass through his hands in the years to come, and at his peak, Gaughan owned an estimated 25% of available real estate in Downtown Vegas, making him one of the most successful mid-century moguls in all of Sin City.

One of Gaughan’s signature properties was the El Cortez, which he purchased in 1963. He moved into the casino’s penthouse with his wife Bertie in 1980, reigning over his Vegas empire from their fully customized perch on the 15th floor. Though Gaughan sold the El Cortez to his business partner in 2008, he kept on living in the suite until his death in 2014. Since then, the El Cortez has kept the suite as Gaughan left it as a tribute to their onetime owner, renting it out by request to Vegas visitors interested in stepping into the shoes of the mid-century magnate.

Though the El Cortez itself certainly doesn’t offer the glamour a mega-resort on the Strip might, the hotel’s recently remodeled hotel tower is nice enough, and it’s clear from the moment you see the swanky Jackie Gaughan suite that you’re in for a singular experience. Once you’ve passed the intercom and reached that first set of initialed interior doors, you’ll realize just how big the Gaughan suite actually is. When this reporter stayed the night, the suite felt positively cavernous, especially for a solo endeavor. There are dozens of doors to closets and powder rooms and hallways, and the suite’s oversized L shape makes it kind of a confusing space to navigate.

Everything Fun and Weird You Can Do on Fremont Street

For Las Vegas tourists who want to get off the beaten track, Fremont Street offers plenty of quirky options.

Despite the clunkiness, the Jackie Gaughan suite is an absolutely fascinating space. It’s like stepping into an estate sale after almost all the knick-knacks have been sold, or using your grandparents’ condo in Florida while they’re up north for the summer. The entire suite is full of stuff, and not just opulent, plush ‘80s furniture all covered in velvet and brass. Start opening kitchen cabinets and you’ll find tons of mismatched glassware. There are decorative liquor bottles in the living room celebrating Gaughan’s time in the armed services, as well as a commemorative cup that appears to have been given to Nebraska-raised Gaughan by the state’s Cornhuskers football team.

All the suite’s interior details were handpicked by Gaughan’s wife, Bertie, and it’s clear she had an eye for excess. Every carpet in the suite is so plush you feel like you’re in a bounce house. There are two charmingly vintage refrigerators in the kitchen space, plus one behind the wet bar. Open the period refrigerators and you’ll be hit with a big wave of, “Oh, wow, my great-aunt had this.”

The 2,800-square-foot suite somehow feels even bigger than that measure would suggest, boasting two enormous master bedrooms—a more sedate beige and mint space for Jackie and a silver and pink palace for Bertie—connected by a private “romper” room that’s filled with old LPs, mod furniture, and a (thankfully) modern TV. While both rooms have en suite bathrooms, they leave a little to be desired in terms of modernity. During my visit, I went to use Jackie’s shower in the morning and found that it wouldn’t even turn on. I hit up Bertie’s instead, where I found ridiculously over-the-top pink and white faux marble fixtures, wall mirrors etched with cherubs and bubbles, and golden swan faucets on the (also very pink) raised soaking tub.

In contrast to what you'd find in a traditional hotel suite, all of Jackie and Bertie’s closets and drawers are still in the suite, too, meaning you can open drawers and doors to your heart’s content. If you’re an estate sale fan like me, or someone who always opens the hosts’ medicine cabinets in their bathrooms when you’re at a party, this room will give you the same kind of voyeuristic thrill. I loved discovering the couples’ shoe closets, finding the faux cabinet door in each bathroom that seemed to have formerly housed a hamper, and even venturing into the two massive walk-in closets near Bertie’s room (both of which still have Gaughan-related items in them, like a dated treadmill). I stumbled upon a massive pile of birthday cards that El Cortez employees and staff had signed for Gaughan leaning against the wall in one of the closets, and with a little examination I even saw an inscription from Gaughan’s grandkids.

The suite’s swag doesn’t stick indoors, either: There are four balconies attached to the room, each boasting panoramic views of beautiful Las Vegas. While they’re certainly not the swankiest perches in Sin City, with thin metal railings, faux plants, and iffy stucco, they make a strong argument for sleeping in Gaughan’s room with the curtains open, looking out at the Strat Hotel's tower and the lights of the Strip beyond. In the morning, you’ll wake up to bright desert sun and step out into Downtown Vegas, where the Arts District is honestly pretty amazing. You could get coffee and food at the El Cortez if you wanted, but I just threw a few coins in the casino’s slots—yes, they still have coin slots—and then headed down to Ferguson’s Downtown for a sausage roll and cold brew at Mothership.

The Best Neighborhoods in Las Vegas to Spend a Weekend

Stick with the Strip or find something new.

These days, the Gaughan suite is available by request. Adam Wiesberg, the General Manager of the El Cortez, says says that while the room is mainly used for events and Hollywood shoots (including Ellie Goulding’s “On My Mind” video) it’s available to rent for about $1,500 per night to just about anyone. You’ll just have to pass a brief vetting by the hotel’s staff first, so they can make sure you aren’t about to wreck the space.

In my experience, the massive suite feels a bit eerie with just one or two people spending the night, so a group stay is probably the way to go here. You should be able to fit at least five or six people (provided people don’t mind sharing beds) for a retro-style night on a special occasion or a viewing party that makes use of the enormous living room TV. The Jackie Gaughan suite seems like the perfect place to make memories with loved ones, just like Jackie and Bertie did all those years ago.