Freaks, families, gearheads, and beach bums: Every summer, they descend on this quiet West Coast town to pay homage to their ghoulish idol. Rockabilly dudes and pinup-styled women arrive in vintage hot rods. Oddballs roll up in old cars covered in toys and antique-store detritus. They're all here to say happy birthday to Long Beach, Washington's most famous resident: a mummified half man, half reptile.

Some say Jake the Alligator Man was once a sideshow performer. Others claim he was a Floridian serial cannibal or a swinging bachelor. Others insist he's just some weird piece of antique folk art. But since 1962, his grotesque visage has peered out from behind a coffin-like glass case at Marsh's Free Museum, a peculiarium plunked amid the sands of an unassuming town near Astoria, Oregon.

Long Beach itself is an oceanside slice of Americana with taffy shops, a kite museum, fish & chips dives, and a boardwalk. It just so happens that its unofficial mascot is a creature that climbed out of a primordial nightmare, right into the town's heart.

"Nobody has anything like this," says Mandy Marsh, the fourth-generation co-owner of Marsh's Free Museum, perhaps the greatest roadside attraction in the Pacific Northwest.

Walking into Marsh's, which began operating in 1921, you're immediately assaulted with sights both wholesome and bizarre. The family has spent a century collecting bric-a-brac like an automated love detector and a vintage baseball machine.

But Jake -- located somewhere between the taxidermied two-headed calf, shrunken heads, bottled stingrays, and a human tapeworm -- is the star of the show.

According to Marsh, her grandparents, Wellington and Marion, were avid pickers. In 1962, they spotted Jake’s creepy, leathery mug peering out from a shelf in a San Francisco antique shop: wiry hair framing his gnarled face, arms in permanent pushup position, tail jutting out behind him. They fell in love.

They plunked down $750 for the creature -- approximately $5,700 adjusted for inflation -- and made him the centerpiece of their roadside curio, printing up postcard souvenirs of his eternally snarling visage.

Jake the Alligator Man has since become a cult figure in an area where Sasquatch normally reins supreme. Marsh's, wise in its hucksterism since day one, began memorializing Jake on hugely popular bumper stickers that have sold in the thousands. You’ll notice "I Brake for Jake" on cars nationwide, and when "friends of Jake" encounter one another on the road, they almost always exchange a knowing nod. 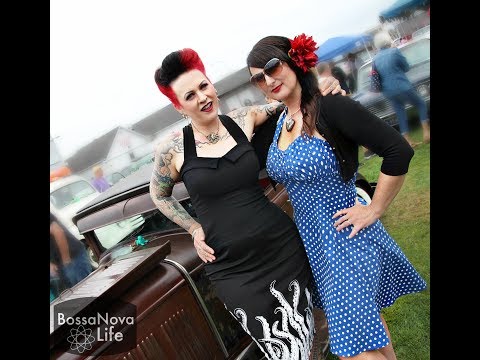 For the past 14 years, Long Beach has commemorated Jake’s birthday with a weekend-long festival featuring rockabilly bands, vintage cars, a burlesque "bachelor party" in advance of a Bride of Jake beauty pageant, and more. (Jake himself, too frail to attend, is represented by a lovingly rendered replica.) This year's event is still tentatively scheduled for July 31, though as with all things right now, could change.

"Come on, [who doesn't] want to go to a bachelor party in a town of 1,200?" says Rev. Chuck Linville, a retired postman who owns a vacation home in Long Beach.

Linville, a legendary Portland weirdo and co-founder of the Cacophony Society, first told me about Jake's party in 2012. He was showing off his legendary toy-and-blasphemy-covered "art cars," some of which he displays alongside revving vintage hot rods at Jake's Birthday (Linville himself is the topic of the short documentary, Thou Shall Not Tailgate).

Linville's descriptions of the event sound like a casual fever dream. There was the time he met local celebrity Extremo the Clown, one-time mayoral candidate and proud owner of a van equipped with a wishing well. Another year, a truck pulled up with a full Tesla coil.

Spend enough time in the Pacific Northwest and these things seem perfectly normal. Here, Jake is right at home. Walk into Marsh's and you'll find people young and old ogling at him, some snapping selfies to prove they had a genuine celebrity encounter.

And to the Marshes, he's family. Visit the grave of Wellington Marsh, and you'll find a carving of Jake on his headstone ("You see that on a headstone 100 years from now, you'll be like 'what the hell is that?'" says granddaughter Mandy).

"People will come in here, and bring their generation in and the next generation in -- it creates memories," says Shannon Ahern, Mandy's cousin and partner. "I used to work in Olympia at a fast food place, and I'd see tons of people with Jake stickers, and I'd say 'hey, that's my uncle.' And they'd always have a story about why they loved him."

Thrillist senior travel editor Andy Kryza is convinced that Marsh's Love Detector is broken, since it always calls him Frigid. Follow him to Long Beach @apkryza.