And this year, it's going digital.

Skin thwaps skin as a mass of 10,000 loincloth-clad men undulates with rumbling kinetic energy. It may be freezing outside, but here in the temple it’s all sweat and ricocheting grunts. They lunge, twist, climb, yell, slip, tangle limbs, and trip each other in a grand mosh pit of masculine bravado. Their goal is to best each other and eventually grasp one of two little sticks symbolizing good luck, and all’s fair to get their prize—even if there’s a priest watching.

Commemorating New Year for over 500 years, this spectacle occurs every third Saturday in February at Okayama’s Kinryozan Saidaiji Buddhist temple in Western Japan, though, naturally, this year's take will look much different than the last five centuries. Called the Saidaiji Eyo festival, it’s the most famous of the Hadaka Matsuri, or Naked Man Festivals. These particular men—and only men—converge to court good luck and a bountiful harvest. At other similar festivals, like central Japan’s Mitsuke Tenjin Hadaka Festival, men parade through town carrying lanterns and ward off evil spirits by performing a devil dance. 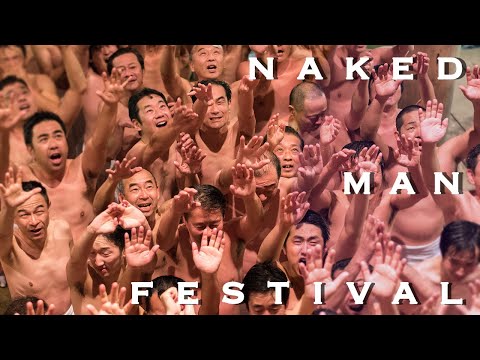 Dating back to 1510, the Saidaiji Eyo tradition began when the temple would hold its traditional Buddhist New Year service to appeal for peace and a bountiful harvest. But only elders of the temple would receive good-luck talismans. The worshippers coveted them for their own good fortune, and began to rumble for the fragile pieces of paper. Eventually the talismans were wrapped around wood to prevent tearing, and dropped down to the masses to compete for the “treasured tree” in a tradition still going strong. In 2016 the Japanese government designated it an Important Intangible Folk Cultural Asset.

Participants aren’t totally naked, but their fundoshi—traditional Japanese underwear—don’t cover that much, especially during the chaotic jostling. The fundoshi are worn because they’re easier to move in, but, really, they do the heavy lifting to make this a must-see attraction and give the festival its cheeky name.

Daytime at the festival means drummers, food stalls, and children's activities, and fireworks. When darkness falls, it's time for the men, who begin by splashing around a fountain near the temple, cleansing the misfortunes of the past year. After everyone’s purified and freezing in February weather, they shuffle over to the main hall of the temple, where priests toss out the two shingi— 20-centimeter-long batons symbolizing good luck—plus 100 bundles of twigs that mostly just symbolize twigs.

The men scramble for their treasured trees, going at it on their own or more likely concocting plans with teammates. Though it’s dark, the shingi are soaked in perfume, so they can also use their noses to guide the way.

Once the found shingi is verified, the finder is deemed Fukuotoko, or lucky man, who will be the recipient of good fortune all year. The whole event lasts about a half hour.

For an Unforgettable Tokyo Day Trip, Just Hop on the Bullet Train

Zoom from ancient mountains to neon cities, and back to Tokyo by dinner.

In a regular year foreigners can also participate, provided they register beforehand. All the equipment needed—your mawashi and your tabi, sock-like sandals—is sold at the venue.

But this isn’t a regular year. The festival has been held for centuries without fail—including during WWII conscription—so in order to keep the tradition alive in the middle of a pandemic, they’ve had to curtail a few things. Rather than open it to the public, on February 20th 141 past winners from 1989 to 2020 will be the only participants, and a winner will be chosen by a relay game, which will be broadcast online.

Not a champion? You can still participate digitally. Men will send pictures of themselves in loincloths and the temple will post them online in an attempt not only to break the internet, but to set the Guinness World Record for the greatest number of loincloth posts per hour.

Because sure, they do it for luck. But the lucky ones are those of us watching.

Vanita Salisbury is Thrillist's Senior Travel Writer. She will emerge for a full moon.