The 99 problems with flying

These days, flying is right up there with going to the dentist and doing your taxes on the list of things people hate. All the pain, but no free toothbrush or refund check. Between awful people at TSA, flight attendants who hate you, and never-ending delays, it’s a wonder anyone ever goes home for the holidays.

And while there are probably a thousand things that make flying absolutely awful, we narrowed it down to the worst 99.

1. Crying babies. Screaming babies. Babies who look at you the wrong way. All babies, pretty much.
2. Anyone taking up too much overhead bin space with a bag they were too cheap to check
3. And justifying it by saying “They ALWAYS lose my luggage”
4. The airlines actually losing your luggage

5. When your flight arrives at gate A2, your connection in 10 minutes will 100% be at gate Z79
6. People who stand on moving walkways when you only have those precious 10 minutes. Or ever.
7. The dude taking a conference call from the toilet stall
8. Those a**holes whose nut allergies have ruined peanuts on planes for everybody
9. Kids kicking the back of your seat, and unapologetic parents
10. Boarding passes that're completely indistinguishable from the Burger King receipts in your pocket
11. People don't actually look like ants AT ALL
12. The guy who should've been required to buy two seats asking if he can put up the armrest

13. Women who somehow get their Pomeranians classified as "service" dogs and act oblivious to the fact that their bag is barking the entire flight from LA to Miami
14. People who think being told to turn off their electronic devices is a legitimate cause for revolution
15. The yogi who needs to stretch in the aisle during a 90-minute flight (unless she's super hot)
16. Families who guilt you into taking the middle seat because they booked last minute but still want to sit together
17. The Dunkin' Donuts line before a morning flight
18. The sheer terror of hearing a cockpit announcement from “Captain Brody”
19. Thinking a little too much about the laws of physics
20. That guy who thinks the whole plane wants to listen to Skrillex
21. The people who run up four rows as soon as the plane lands and the seatbelt light goes off, saving them a whole 15 seconds deboarding

22. Bag drop lines that don’t move. Seriously, how long does it take to drop a bag?
23. Flight attendants interrupting a nice in-flight viewing of Everybody Loves Raymond to tell everyone about the 10,000 bonus miles you'll get when you sign up for a credit card
24. Two words: Spirit. Airlines.
25. TSA telling you, “You look a lot younger in this picture”
26. The fear of having your guts sucked out if you accidentally hit the flush button
27. Seeing there're four flights ahead of you at the baggage claim carousel
28. And the only food available is a $3 bag of Famous Amos from a vending machine
29. Freezing for an entire flight because you saw a 20/20 (60 Minutes, 48 Hours, whatever) exposé on airplane blankets
30. Turbulence boners
31. The person who doesn't understand the definition of "shoes" in the security line

32. People who recline their seats
33. People who won't let you recline your seat
34. People who actually get in fistfights over reclining seats
35. Anyone who doesn’t know the drill at TSA -- aka everyone in front of you
36. Seatmates who want to chat
37. Forgetting your headphones, especially when you’re sitting next to that person
38. Those steakhouses they list in the magazine really AREN’T the 10 Best in America
39. Anyone who’s ever hit on a flight attendant. You ain’t no Stan Zbornak, pal.

40. The endless temptation of Skymall
41. They don’t give you plastic wings or let you tour the cockpit anymore
42. Regretting that 64oz soda you drank in the terminal when you hear, “We’re 12th in line for takeoff. Please remain seated.” over the intercom
43. No, the hot girl is not going to sit next to you
44. Bars that DON'T give you a double for $2 extra
45. Status whores
46. JFK Airport. Just, all of it.
47. In-flight farts
48. Gate agents who press random keys on a circa-1986 IBM to look busy so they don’t have to help you 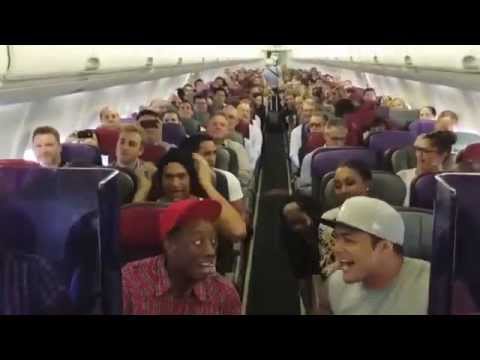 49. Being on a plane when the f**king cast of the Lion King starts singing
50. Being over six-feet tall. In coach.
51. Long flight? You now have a cold. Airborne is a multivitamin that fizzes.
52. Deciding whether checking in with the boss is really worth the $14.99 internet fee
53. Forgetting to unsubscribe to Boingo
54. That “free” bottle of wine you got as a gift actually now costs $25, because you had to check your bag
55. Having to frantically transfer four pounds of clothes from your suitcase to your carry-on as the entire bag-check line furiously looks on
56. The flight attendants aren't hot any more
57. Armrest wars
58. Airlines that haven’t figured out self-service bag check
59. Having to walk by those smug little eight-year-olds sitting in first class

60. Airports that don’t have trains into the city
61. Flight attendants who say “we can see here that there’re still some of you with your phones on” like there’s some kind of magical phone detector in the crew galley
62. The dude sitting next to you with Restless Legs Syndrome
63. Pizzeria Uno at the airport just isn’t the same
64. Getting stuck next to somebody who's in a multi-level marketing scheme
65. The appalling bathroom-to-passenger ratio
66. Whoever brought the meatball sub onboard for dinner

66. The only food on a six-hour flight is a cold $10 sandwich
67. And it's just as bad as the free ones you got in the '90s
68. People who apparently just ran a 10k before taking off their shoes at security
69. Thinking “Next time, I need to sign up for TSA PreCheck”. And never doing it.
70. Carry-on baggage fees
71. Families of nine checking in ahead of you with 15 suitcases
72. Flying a non-American airline to a Third World... ummm, Less-Developed Nation
73. Arriving during a baggage-handler shift change
74. People who park their cars at curbside pickup
75. Cops who scream like you just shot a dude the second you stop your car on the airport drive
76. Not remembering if you've been in contact with farm animals, farm-animal products, or products for farm animals at any time during your trip to Ibiza

77. That tray table puts your laptop a very-uncomfortable four inches from your face
78. Flights listed as “on-time”, yet there’s no plane at the gate 10 minutes before departure
79. The flight attendant who uses the safety spiel as their 20-minute open mic audition for Last Comic Standing
80. Listening to two people realize they're BOTH reading Eat Pray Love before a big trip. OMG, what a coincidence???
81. Leave for the airport painfully early, or panickingly late: your choice.
82. Secondary airports located an hour from your house that your geographically-ignorant friends insist on flying into. At rush hour.
83. The guy who thinks playing his guitar in the terminal will yield the same result as when he plays it in front of the dorms
84. Anyone who jumps up right before takeoff and claims the open seat in what would have been a row all to yourself
85. The woman with a reading light so bright it could be used in a terrorist interrogation
86. The middle seat

87. Outlet hoarders
88. The guy who stands up by grabbing the seat in front of him like he's at a rock-climbing gym
89. Getting "cut off" by the flight attendant (I have NOT had too much to drink!)
90. Having The Other Woman or that GPS map as your only two in-flight entertainment choices
91. $6 coffees
92. $8 magazines
93. $10 beers
94. $12 pizzas
95. Leaving anything in the seat-back pocket
96. Everyone who gets air sick and actually uses the motion sickness bag
97. Anything at all being "Out of Order", even if you wouldn't use it anyway
98. Trying to urinate standing up when the plane's moving even a little bit
99. People who spend the whole flight complaining about flying. But are on the plane, anyway.