Opening Soon in Denver: A Psychedelic Sci-Fi Portal to Other Worlds

Depending on your physical capabilities, there are parts of the Wheelchair Space Kitchen—just one of many rooms in Meow Wolf’s 90,000 square-foot Convergence Station, which opens in Denver on September 17—that won’t be accessible. A cabinet will be too high, a countertop too low. You might feel like you’re Alice in Wonderland, shrinking too small to reach a table or growing too tall to fit through a door. Some messages are written in Braille, and unless you read Braille, you’re out of luck.

The chamber gives a small preview of what it’s like to be disabled navigating an able-bodied world, daily life for Kalyn Heffernan of the Denver-based experimental rap group Wheelchair Sports Camp, who designed the space with bandmate Gregg Ziemba. Heffernan, who is also a teacher and activist (she once “rolled” to be mayor of Denver as a performance piece, with a frankly incredible platform) was born with a genetic brittle bone disease, and uses a wheelchair.

The band employed a similar visual concept in their music video for “Mary Had a Little Band.” “We were in a small room that fits me well and the rest of the band is really crammed in,” Heffernan says. “Our original concept [for Meow Wolf] was to make a room for wheelchairs only, but that wasn’t very accessible. Which is so ironic to me, because that was the point.”

A Wheelchair Sports Camp song vibrates in your ears as you enter the Kitchen (tip: open the fridge for a low-sensory reprieve). The décor—a teal stove hood made from an old Ford suspended from the ceiling, art from an old Yield sign, a wheelchair acting as a fancy chandelier—is all upcycled. Explains Heffernan, “We wanted to give this aesthetic about making do with what you have because most people with disabilities are in poverty, and most people with disabilities can’t really afford fancy accommodations.”

Magnets and mementos nod to pioneering disability activism in Denver, where protests as early as 1978 by the group Atlantis—later with ADAPT—helped make it the first US city to introduce wheelchair-accessible buses and later, curb cuts on sidewalks for easier mobility. “[The room is] full of a bunch of dope disabled leaders and artists, and it’s got some cool Denver stuff,” says Heffernan. “We tried to make it look like it’s a time portal that I’ve been living in with my weirdo artist friends.” 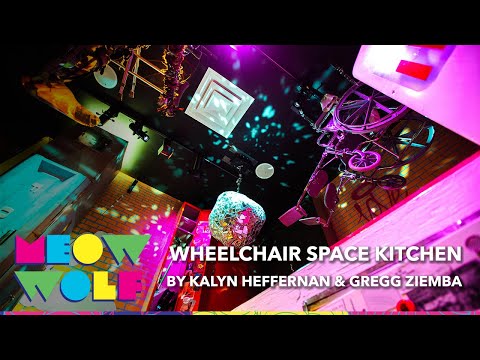 Having strong local ties was important to Meow Wolf—the underground arts collective-turned immersive event juggernaut. This is their third permanent installation, after 2016’s House of Eternal Return in Santa Fe, and Omega Mart in Las Vegas, which opened earlier this year. Here, the café will be serving beer from the Latinx-owned Raices Brewery down the street. Of the 300 or so artists represented in the space, 110 of them are from Colorado. And the overarching narrative behind Convergence Station is inspired by the surrounding neighborhood.

The $60 million building, which looks kind of like the bow of a ship, or maybe a drooping slice of pizza, is wedged between Auraria Parkway, Colfax, and Interstate 25 in Sun Valley, one of the oldest communities in Denver and a melting pot of immigrants and refugees. “We felt like this location was a really great way for us to enrich the community we’re in, bringing jobs and being an art partner along with some great organizations like the Latino Cultural Arts Center, which is just right down the street,” says Chadney Everett, Meow Wolf Denver’s Senior Creative Director.

And this is Meow Wolf, so of course, you’re thrown into an elaborate, fantastically fun narrative as soon as you walk into the door.

As the (simplified) story goes, in 1994 there was a cosmic collision of four worlds which erased the memories of all their inhabitants. “Memory became the most valuable thing to them, because it’s about how we identify ourselves in culture,” says Everett.

Visitors enter through the Quantum Department of Transportation (QDOT) to navigate the four converged worlds. There’s the green, flower-filled world of Numina, featuring giant plants; the ice world of Eenia, with a 33 foot-tall stained glass cathedral; and C-Street, which according to the story was the sanitation district of its previous planet. “They are very glad to be separated from their home planet which did not value them at all,” says Everett. “They wear upcycled fashion trash clothing…and they have created their own mayoral election system where a new mayor is elected every 20 minutes, because they don’t trust politicians.”

The last of the four worlds is Ossuary, where residents live underground in glowing nightclub-like catacombs. The four societies intermingle and have differing thoughts on their immigrant experience. The people from C-Street are stoked to be there, while many from Numina long to return home. “It’s about what it means to bring diverse people together that are not only interested in the important work of maintaining their culture, but also simultaneously becoming a part of a new group culture,” says Everett.

Collaborating artists don’t have to adhere to the narrative, though, and sometimes it’s more fun if they don’t. One installation from the Los Angeles-based artist collective Everything is Terrible! drops you into an alternate-reality Chuck E. Cheese they call Pizza Pals Playzone. “There’s an animatronic band and these amazing talking tree sculptures,” says Everett. (Sadly, pizza is not included.)

Kyle Singer—an interdisciplinary artist and self-described “color slut” of the artist collective Waffle Cone Club, created Sa Lawn—a hair salon where you can stick your head in a beehive hairdryer and enjoy an alien fashion show. Earth Spirits of the Subconscious Mind—by Denver natives David Ocelotl Garcia and Cal Duran—combines murals, sculptures, and sound for a calming installation that connects to their indigenous and Mexican ancestral roots. A performance venue called the Perplexiplex holds events by night; by day, it’s the realm of Montreal artists Moment Factory, who use projection mapping to create a 360-degree interactive musical and visual storytelling experience.

But maybe Wheelchair Space Kitchen actually does adhere to the larger convergence narrative, whether they meant to or not. Call it a convergence of abilities. “The room ends up being about interdependence,” says Heffernan. “You can do things that I can’t and vice versa, and that might be difficult, but if we work together and if we have a dope relationship, now we have two ways to connect.”

Experience it yourself beginning September 17. Tickets for Convergence Station are now on sale for $45; $35 for Colorado residents.