The Most Exciting New Theme Park Rides Opening This Year

Get ready to lose your lunch. There are a lot of new rides hitting US theme parks in 2022.

“Weird year” has become a euphemism for “things kinda suck.” As in, “How’s school going for your kids?” “Well, they had remote learning for months, they can’t interact with other classes, and now the teachers are on strike. Been a weird year.”

Theme parks, however, have been busy putting a positive spin on the phrase “weird year,” making plans to cut the ribbons on way more new rides than most years as they catch up on construction from COVID-related delays. At last, 2022 will see the launch of a giant, immersive Star Wars-themed hotel, record-breaking roller coasters, several family-friendly parks, and so much more.

Before summer arrives and you realize you should have done something better than sitting in the backyard zoning out for three straight months, here are the best and most superlative-laden rides and attractions hitting theme parks in the US this year.

Guardians of the Galaxy: Cosmic Rewind

Disney World
Orlando, Florida
Florida is officially getting its first Guardians of the Galaxy ride. It’d probably thrive on the Marvel name alone, but on top of that, it has all the superlatives you’d expect from a coaster not already tied to massive IP. Situated next to the "Wonders of Xandar" pavilion, the indoor coaster will be the first at Epcot Center and the first reverse-launch for a Disney coaster. (Think, Hagrid’s Magical Motorbike Adventure.) Disney World also says it’s “one of the longest fully enclosed coasters in the world.” It’s expected to open sometime in summer 2022, but as far as an exact debut date goes, you'll get as much specificity from the park as you’d get by asking Groot anything other than, “What’s your name?”

Disney World
Orlando, Florida
The Galactic Starcruiser is a one-of-a-kind experience. There’s really nothing like it. It’s not a ride, but a two-night stay inside a faux starcruiser where you enter the world of Star Wars and role-play your way through an ever-changing story. The things you do during your stay aboard the Halcyon starcruiser impact the story and what you’re allowed to do. Think of its as real-life Dungeons and Dragons on an intergalactic luxury cruise ship, with missions, games, entertainment, and lots more. (Be warned: It's got a steep price tag.) The vessel began taking passengers on March 1.

Disney’s New Star Wars Hotel Will Transport You to a Galaxy Far, Far Away

Get ready to chase a storm trooper.

Six Flags Magic Mountain
Valencia, California
Part of the growing DC Universe theme area, Wonder Woman Flight of Courage is the world’s tallest and longest single-rail roller coaster. (To clarify: That’s different than being the same as longest or tallest overall.) It rises 13 stories into the sky and hits 58 mph. The whole ride is themed after the superhero’s strength and speed and has an immersive, Wonder Woman-themed queue. The opening of this coaster will also make Six Flags Magic Mountain the park with the most roller coasters, bringing the grand total to 20. 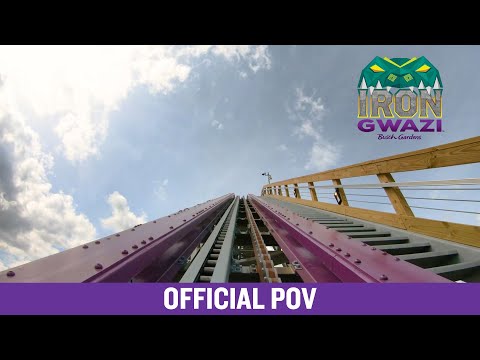 Drops in the Iron Gwazi ride&nbsp;are not for the faint of heart.

Busch Gardens Tampa Bay
Tampa, Florida
Roller coaster enthusiasts know that Busch Gardens has some intense coasters. Iron Gwazi, originally scheduled to open in 2020, does not buck the trend. The hybrid coaster touts "a dozen airtime moments,” three inversions, a top speed of 76 mph, and a 91-degree drop from 206 feet in the air. That first drop is not for the faint of heart, and you can prove your mettle starting March 11.

Glenwood Caverns Adventure Park
Glenwood Springs, Colorado
Expected to open in summer 2022, the Defiance sounds fun—but at just 56 seconds of ride time, there’s bound to be a rough ride time-to-wait time ratio. Nonetheless, the big feature is a 102.3-degree free-fall drop from 110 feet up in the air. That’s real steep. Plus, the coaster appears to be situated at the top of a hill near the edge of the park, giving some weird perspective shifts as you speed along the track.

Busch Gardens Williamsburg
Williamsburg, Virginia
Opening March 25, Busch Gardens claims Pantheon is the fastest multi-launch coaster in the world, which, as far as superlatives go, is pretty damn impressive—especially considering the 73-mph launch is just one of its attractions. You’ll get a 95-degree drop, four launches, five airtime hills, and a pair of inversions. Plus, that 95-degree plunge comes just after a reverse launch, so plan on having lunch after the ride and not before.

Look Out Disney, Universal Is Opening a Massive New Theme Park in Orlando

Six Flags Fiesta Texas
San Antonio, Texas
Welcome to the world’s steepest dive coaster. It rises 150 feet up into the air, then holds passengers high in the sky before dropping them down a 95-degree plunge at 60 mph. If that’s not thrilling enough for you, there’s also an Immelmann inversion: a 270-degree zero gravity roll named after a maneuver used by World War I pilots. That’s in addition to the near-vertical drop, an airtime hill, and more. Oh, and it’s floorless. Be sure to tie your shoes tightly.

SeaWorld San Diego
San Diego, California
Named after the park's famous emperor penguins—SeaWorld San Diego is the only place in North America where you can see one in person—this coaster was supposed to open back in 2020 but, like many rides, suffered delays due to the pandemic. At last, the floorless coaster is finally ready to welcome thrill-seekers. It hits 60 mph and has a 150-foot drop. It's billed as the "tallest and fastest floorless dive coaster in the state," which is a pretty specific superlative but alluring nonetheless.

The Tallest, Fastest & Longest Dive Coaster in California Finally Has an Opening Date

SeaWorld is ready to open Emperor in March.

Fun Spot America
Atlanta, Georgia
This new coaster boasts the largest zero-G stall in the US. The ride only lasts for 100 seconds in total, but during that short ride time, you’re getting the first-ever raven-truss dive, a zero-g roll over the Fun Spot Arcade (one of two zero-G rolls!), plus a 146-foot drop and a top speed of 64 mph. There’s no official opening date yet, but Fun Spot says it’ll arrive in 2022.

SeaWorld
Orlando, Florida
Like SeaWorld’s Emperor, Ice Breaker’s opening was delayed due to the pandemic. Ice Breaker sports backward and forward launches, including a reverse launch into a 93-foot, 100-degree angle fall that SeaWorld's calling the "steepest beyond-vertical drop" in Florida. (For the record, that’s still less steep than the drop on Defiance.) The opening moments look like you're a baby being rocked to sleep by a demon. That's a whole lot of anticipation to endure if your least favorite part of a coaster is the climb to the top.

10 Reasons to Drive to Orlando, Florida

Six Flags Over Texas
Arlington, Texas
Just in time for the 60th anniversary of Six Flags Over Texas, this 2022 opening is a reimagining of The Cave—one of the park’s first-ever attractions, operating from 1964 to 1991. It’s being touted as a “state-of-the-art attraction” that puts riders “squarely in the middle of a pirate treasure hunt thwarted by resident speelunkers.” The dark ride will feature 17 scenes and projections, sets, and animatronics throughout.

Cotaland
Austin, Texas
The kid-friendly park is at Circuit of the Americas, which plays host to the Austin Grand Prix Formula One Race. Though, let’s be clear: the aptly-named Palindrome is not for kids. Throughout the ride, you’ll pass through a couple of inversions at a top speed of 51 mph before hitting a dead-end spike and reversing, going through all the features again backward. (Hence the name!) Reports say that Palindrome is slated to open to the public in 2022, though no exact date is confirmed.

Winterhaven, Florida
This new amusement park is all about Peppa, so if the show has given your kid a faux British accent, they’ll fit right in. Peppa Pig Theme Park is specifically designed with preschoolers in mind and an eye on accessibility: It’s a certified Autism Center and has rides that children who use wheelchairs can roll onto without needing to transfer out of their chairs, ensuring as many kids as possible can play and enjoy.

Crystal Lagoons Island Resort
Glendale, Arizona
Glendale will no longer be home to the Arizona Coyotes by the end of the year, but it will be home to the first and only Mattel-themed park. There will be go-karts, a Hot Wheels roller coaster, a Thomas & Friends indoor theme park, and more. All of Crystal Lagoons Island Resort is expected to open this year, less than a year before Glendale hosts the Super Bowl.