It's a catch-22 when you go for a massage: You either opt for the massage therapist you think is the hottest, or you go for the one you think will manhandle your muscles the best -- and there's a good chance it's a masseur whose hands could snap your tibias in two.

Luckily, the folks over at the Cebu City Zoo in the Philippines came up with a brilliant third option: Deadly pythons!

Not convinced? Well, it's free. Still not? Then let's dive into the details of what a cold-blooded massage looks like.

Those brave enough to volunteer end up beneath a 550lb pile of four deadly, 16ft-long Burmese pythons that'll be squeezing the living knots out of you. But don’t worry, each snake has already been fed 10 full chickens, so they probably won’t try to make you into an early afternoon snack.

You'll lie down on a bamboo mat under the watchful eyes of zookeepers, who then place Michelle, Walter, EJ, and Daniel on you for about 15 minutes, instructing you not to agitate them by shrieking or breathing too heavily. No word on whether or not wetting your pants offends the snakes.

The slithering and squeezing is said to be therapeutic and relaxing, which might explain why the good folks at Cebu City zoo just thought, "What the heck! Let’s make it a massage"!

Check out the video of a reptilian rubdown below. She doesn't look at all frightened! 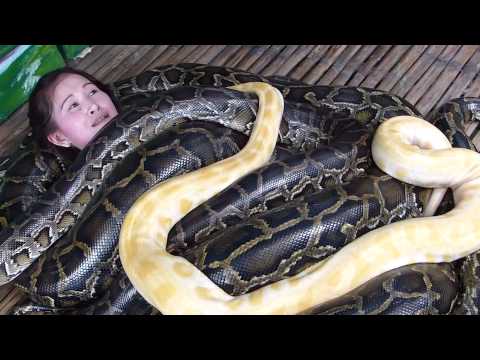 Sophie-Claire Hoeller is Thrillist's über-efficient German associate travel editor, and has had frequent flyer status since she was born in a Lufthansa terminal. Follow her @Sohostyle