You can get almost anything from a vending machine: beer in Bulgaria; used undies in Japan; sex toys in Spain; and healthy snacks instead of Cheetos anytime you actually want Cheetos. Now in Hangzhou, China, you can treat yourself to a ride -- for a few hours, at least.

As part of a car-sharing initiative, the electric car manufacturer Kandi Technologies has set up 2 mammoth vending machines in the last year. They look like giant Pez dispensers, except they're upside-down and not shaped like a cartoon character. And there's no candy. Why's this interesting, again? Oh yeah: cars!

Introduced to tackle the pollution problem -- China’s pretty much swaddled in smog -- the scheme aims to put 2 million EVs on the road by 2020. Only 10% of the Chinese population owns a car, but vehicles make up 50% of the country’s pollution -- hence the push to get people driving smaller, shared electric cars, rather than mega, gas-guzzling ones.

Once your tiny car pops out of a Kandi machine, smoothly ferried down from its slot in a multi-story garage, it’s fully charged and ready to go. A carbon-efficient solution -- and, at just over $3 per hour, a smart economic one -- you’ll get around 75 miles out of your EV (at a sad max speed of 50mph). At least it’s easy to park.

There’re plans to add an additional 10 stations by 2014, in cities like Shanghai and Beijing. 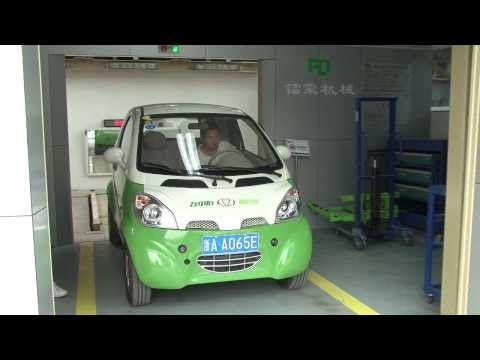