The 10 Craziest Shark Attack Stories of All Time

Although Shark Week 2015 concluded last month, a wise man once said you should live every week like it's Shark Week. That man might've been Tracy Jordan, but he has a point. And since it's still summer, we thought we'd close out the season with some insane shark attack tales that might just scare you off the shore. The stories go all the way back to 1749, but the most recent one happened, like, four weeks ago. We included an international coastal lineup, because we're all about equal opportunity nightmares here at Thrillist:

The story: Technically, this is the tale of a thwarted shark attack, but it's still pretty insane. Rob Howe, his teenage daughter, and two of her friends were swimming about 300 feet from New Zealand's Ocean Beach when seven dolphins sped towards them. The animals formed circles around Howe and the girls and aggressively slapped their tails against the water. Howe wasn't sure what was happening until an opening appeared for a second and he spied an unmistakable great white shark. The dolphins maintained a shield around the group (all lifeguards, incidentally) for 40 minutes, staying with them as they swam back to shore. Basically, these guys are heroes, and deserve a TV show way more than stupid Flipper.
The most terrifying quote: "It glided around in an arc and headed for the other two girls. My heart went into my mouth, because one of them was my daughter." - Rob Howe

How Are My Exposed Organs Looking?

The story: By all accounts, Rodney Fox shouldn't be alive, much less leading shark expeditions for a living. But the Aussie must have Wolverine blood, because he managed to survive a grisly 1963 attack. A great white shark came after Fox while he was spearfishing on Aldinga Beach in Australia. Over the course of the struggle, Fox nearly gouged the beast's eyes out, but the sea monster definitely managed to get points in too, nearly biting Fox in half, leaving him with a punctured lung, exposed vital organs, and several broken ribs. It took four hours of surgery and 462 stitches before Fox was in the clear. Because people are weird, Fox then decided to dedicate his life to studying sharks.
The most terrifying quote: "I went to the surface, took a couple of breaths of air and looked down and as best as I could through the blood-red water, I saw this great big shark coming up with its mouth wide open." - Rodney Fox

The story: You probably know this one, but that doesn't make the story any less incredible. Bethany Hamilton lost her arm to a shark when she was just 13 years old. It was the work of a 14-foot-long tiger shark, which targeted Hamilton as she was surfing in Kauai on Halloween morning. She lost her entire left arm and over 60% of her blood. But thanks to her friend's father, who fashioned a quick tourniquet out of a surf leash before they ran to the hospital, Bethany lived. In fact, she returned to the waters one month later, and won her first national title about a year after that. She then turned pro, grew up, got married, went on The Amazing Race with her husband, and had a kid. What have you done lately?
The most terrifying quote: "It was about a two- to three-second period and when it ... was attacking me all I saw was like a gray blur." - Bethany Hamilton

The story: It was long rumored that Peter Benchley drew inspiration for his novel Jaws from a spate of shark attacks that occurred along the New Jersey coast in 1916. While Benchley later claimed there was no connection, the events still sound like a horror movie. Things kicked off on July 1st, when Charles Vansant was attacked off Long Beach Island. By the time a lifeguard pulled him to shore, he'd bled to death. Five days later, Charles Bruder was mauled in Spring Lake. But those were just appetizers to the bloodiest day, which took place on July 12th in Matawan Creek. An 11-year-old named Lester Stillwell was the first victim. He did not survive. Hoping to save the boy, Watson Stanley Fisher had jumped into the water, but the shark just took him out, too. Joseph Dunn was the final victim, though he actually survived the attack -- his leg just didn't. The community first couldn't believe a shark was responsible -- there aren't sharks in New Jersey, and they certainly don't attack people! -- and later shifted into revenge mode. Those locals eventually killed a great white shark they believed was responsible for the Matawan attacks, because it supposedly had human remains in its belly.
The most terrifying quote: "ALL BEACH BATHING VIRTUALLY SUSPENDED" - The Eugene Register-Guard

The story: One of the earliest "famous" shark attacks involved a 14-year-old cabin boy named Brook Watson. Watson was swimming in the Havana harbor in 1749 when a shark (probably a tiger shark) grabbed his right foot. It dragged the teen underwater and chomped on his foot a second time before a sailor with a boat hook came to the rescue. The man managed to beat the shark back and Brook survived, though the doctors couldn't save his right shin, which was amputated. The story might've ended there, if Watson hadn't gone on to become a member of Parliament and eventually lord mayor of England. He was so damn proud of himself, in fact, that he personally commissioned John Singleton Copley (the guy who painted all those Revolutionary War scenes) to create "Watson and the Shark." It's the painting above, and it scared the hell out of colonial kids back in the day.
The most terrifying quote: This happened in 1749, so we're not sure. "Ow"?

Gone Without a Trace

The story: The horrifying story of Robert Pamperin goes back to June of 1959. The scene: San Diego's La Jolla Cove. Pamperin was diving for sea snails with his buddy Gerald Lehrer and all was going smoothly, until Lehrer heard Pamperin scream. He looked over and saw Robert hoisted high out of the water without his mask. Why was he so high up? The entire lower half of his body was in the mouth of a shark. Lehrer followed the shark under the water and tried to divert its attention, but it wouldn't take the bait. So he swam to shore for help instead. By the time a rescue team got out there, all they could find was a lone swim fin. Which means the shark probably swallowed Pamperin whole.
The most terrifying quote: "It was so big I thought at first it was a killer whale. It had a white belly and I could see its jaws and jagged teeth...It was between me and Bob and I could see him kicking his legs at it but it kept biting at him." - Gerald Lehrer

Save Your Brother, Go to the Olympics

The story: Achmat Hassiem does have a medal (we'll get to that in a sec), but he should get an automatic trophy for world's greatest lifeguard/brother. Achmat and his younger brother Tariq were helping the local Cape Town lifeguards out with a training exercise, in which they had to play the swimmers-in-jeopardy. The roles got ironic real quick as Achmat spied a great white heading towards Tariq, who was playing an unconscious victim and was thus prime meat. Achmat started splashing as much as he could, hoping the sound would steer the shark away from his bro. The plan worked too well -- the shark course-corrected towards Achmat and took out half his right leg. He made it onto a dinghy and to the hospital, where he spent his recovery pondering his future. Competitive swimming sounded good, and he quickly racked up enough records to represent South Africa in the 2008 Paralympic Games. He won bronze and later became a runway model for Mercedes-Benz Fashion Week in Cape Town. Take that, shark.
The most terrifying quote: "That's when I saw that half of my leg was in the shark's mouth already. I didn't feel it bite down at all." - Achmat Hassiem

The story: This one happened just a few weeks ago, but considering it involves a shark crashing a professional surf competition during a live broadcast, we had to share. During the 2015 J-Bay Open on South Africa's Eastern Cape, competitor Mick Fanning had a scary close-call with a marine predator. The shark first started gunning for his surfboard leash, which prompted Fanning to jump out of the way. But it kept coming for his board (and presumably, him), so Fanning punched it in the back. Luckily, since this was an actual sporting event, the J-Bay Open sent in a rescue squad almost instantly. Fanning's leash had been chewed off, but he was okay -- as was another surfer the crew picked up, Julian Wilson.
The most terrifying quote: "It just kept coming at my board and I was kicking and screaming... I was waiting for the teeth to come at me." - Mick Fanning 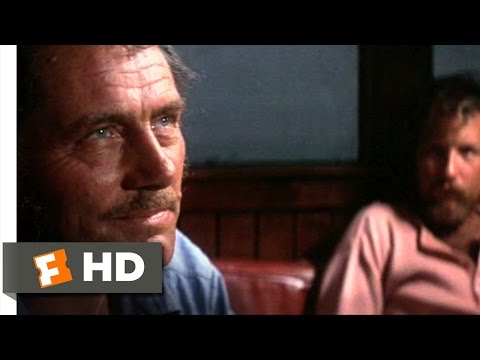 You Were on the Indianapolis?

The story: Remember that long story Quint tells Hooper and Brody about being shipwrecked by the USS Indianapolis? That wasn't Spielberg making shit up for Jaws. The Indianapolis was a real ship fresh off a mission to deliver components of the first atomic bomb to a naval base in Tinian in July of 1945. Next, it was supposed to meet the USS Idaho in Philippines to prep for an invasion of Japan, but got torpedoed by the Japanese. The ship sank, leaving 900 survivors in the water... with the sharks. The explosion and subsequent blood in the water attracted the predators, who proceeded to feast over four days. By the time the crew was spotted by a Navy plane, only 317 men remained. Granted, many succumbed to dehydration and exposure, but it's considered the "worst shark attack in history."
The most terrifying quote: "Every now and then, like lightning, one would come straight up and take a sailor and take him straight down. One came up and took the sailor next to me. It was just somebody screaming, yelling or getting bit." - Loel Dean Cox, a survivor

The story: We close on a story in which the shark probably should've been scared of his victim. Junior doctor James Grant was spearfishing with friends when a shark (he thinks it was a seven-gill) went for his leg. Rather than freak out like a normal human, Grant started stabbing the thing with his diving knife until it pissed off. Then, he continued to act like a superhuman by stitching up his own leg on shore (with the first-aid kit he keeps for his "pig-hunting dogs") and heading to the bar with his buddies for beer. He eventually went to the hospital, but not until he'd finished his pint. All this begs the question: where the hell is our pig-hunting, spearfishing, shark-stabbing doctor comic book, Marvel?
The most terrifying quote: There really isn't one, because dude is such a G. So we'll offer the funniest one instead. "To be honest it was a bit of an odd reaction. It wasn't really fear or anything, it was just like: 'Fuck it, I've got to try and get this thing off my leg'." - James Grant, fearer of nothing

Kristin Hunt is a staff writer for Thrillist, and is afraid of sharks, but only in a water situation. Follow her to personal information waltzes at @kristin_hunt.