The only acceptable time to be this polar-vortex-cold is when you're strapped into your skis/ board and staring down a run. And if it's one of these, you're sure to be warmed by an overdose of adrenaline... but you'll need more than that to get you to the bottom in one piece.

10. S&S Couloir -- Jackson Hole, WY
While Corbet’s might be the most famous chute at Jackson Hole, consider S&S Couloir, its bigger, meaner brother. You’ll need permission from the Jackson Hole ski patrol before dropping 30ft into a chasm filled with bare rock, and either skiing down or getting medivac’d out.

9. The Highland Bowl -- Aspen, CO
Considered the toughest terrain at one of the world’s most famous ski resorts, Highland Bowl reaches 12,382ft and, at points, is as steep as 48 degrees. The bowl was closed to the public for over a decade after an avalanche killed three ski patrol members in 1984, but today it's open and serviced by a lift called “Deep Temerity” -- which means "reckless boldness", if you're also preparing for the SAT.

8. KT-22 -- Squaw Valley, CA
This isn’t technically a run, but a lift-serviced area of interconnected routes, none of which are easy. The chutes, glades, and bowls don’t hold powder for long, so you’ll need to get there early. Also, keep your eyes peeled for Olympians Jonny Moseley and Julia Mancuso -- both ski here, so much there’re trails named after them.

7. Outer Limits -- Killington, VT
The steepest mogul run east of the Mississippi, Outer Limits is known for breeding huge, wonky-shaped bumps with super-deep ruts. It’s also in full view of both a lift and the bar at Bear Mountain Lodge, where sauced après-skiers will let you hear it if -- or, more likely, when -- you go @ss over teakettle.

6. Christmas Tree Bowl -- Steamboat Springs, CO
Steamboat Springs has a population of just over 12,000 people, yet it’s produced 79 winter Olympians since 1932 -- more than any other town in America. A huge reason for that is the impeccable downhill skiing. Christmas Tree Bowl is arguably the crown jewel, and combines gut-tightening steepness with some of the best tree-skiing anywhere on Earth.

5. Black Hole -- Smuggler’s Notch, VT
The only triple-black-diamond (yep, they totally exist) run in Vermont, Black Hole rocks a 53-degree pitch and plenty of trees to negotiate at high speeds.

4. Rambo -- Crested Butte, CO
With a 55-degree pitch, Rambo is as badass as its namesake and is alleged to be the steepest manmade ski hill in North America. Mercifully, much like Sly Stallone, Rambo’s short: it measures up at at just under 1,000ft long.

3. Al’s Run -- Taos, NM
Super-long and pocked with moguls, Taos’ marquee ski run would be intimidating enough even if it didn’t snake under the resort’s main lift, where safely-out-of-reach hecklers want nothing more than an unadulterated shot of schadenfreude. Namely, you having a full-on yard sale.

2. Silver Fox -- Snowbird, UT
Blessed with some of the best snow in North America, Snowbird is a skier’s mecca. And while better-known runs like Great Scott and Upper Cirque get most of the attention, Silver Fox’s arguably the gnarliest of the bunch. Freakishly steep and covered in deep powder, this is another one of those trails that goes directly below the lift line. 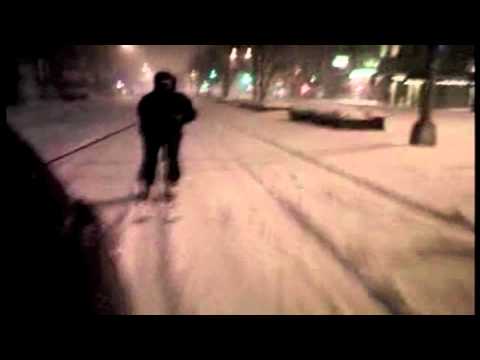 1. Manhattan -- New York, NY
Obviously, this isn’t a ski run and we don’t advise you try it at home, but still: you gotta admit this dude kind of crushed it during New York’s blizzard of 2010. Good thing he didn’t also crush those pedestrians at the 0:48sec mark.