College sports fans have some great traditions that everybody knows, like throwing up the “Hook ‘em horns” at Texas, and not going to games at Miami. But across America there are traditions at schools large and small that many people have never seen, or even heard of. So to ensure you don't roll into Madison and start jumping around to Kris Kross rather than House of Pain, we've put together this list of our top 25 fan traditions. 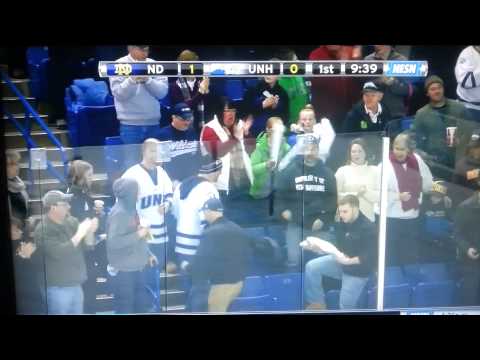 Fish Throwing
While some fans throw pucks, hats, or octopuses after the first home goal of every hockey game, the Wildcat faithful toss a dead fish onto the ice in front of the opposing goal.

Sod Cemetery
Because stealing is second nature to anyone playing football at FSU, the Seminoles have made a tradition of plucking some sod from home teams’ fields after big away victories, then planting it in a cemetery in Tallahassee so fans can visit.

Walk On
While the Soviets had Red Square in which to showcase the strength of their military, America chose a much more depressing location to display ours -- Philadelphia’s Veterans Stadium. Before kickoff of the annual Army-Navy game, Midshipman and Cadets would march on the field in full uniform. Fortunately, both the Soviets and the Vet are gone, but the tradition still lives on at Lincoln Financial Field. 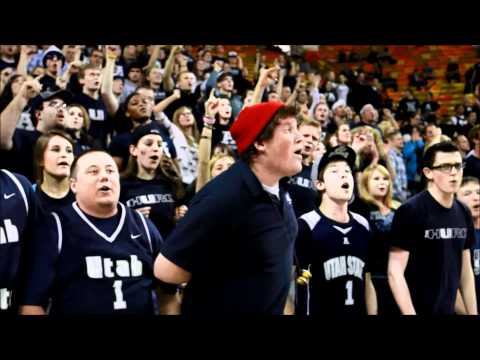 ”I Believe” Chant
The intensity of this chant, where each word of the sentence “I Believe That We Will Win” is added as the chant goes on, is one of the coolest in college basketball. Down the road at BYU they’ve got a similar “I Believe” chant, but means something totally different.

The 12th Man
You know how to mess with someone from Seattle, other than bringing up your love for the Thunder? Tell them they didn’t invent the 12th man. That honor belongs to the students of Texas A&M, who remain standing for the entire game in solidarity with the players on the sideline. 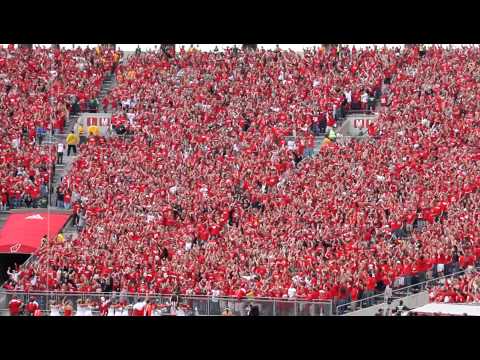 Jump Around
You know that feeling at a house party when House of Pain’s “Jump Around” comes on, and you immediately clench up expecting to get knocked over by some dude who’s taking the song a little too literally? Multiply that by 90,000. And then throw in brats.

Gator Chomp
Gator fans world-wide will extend their arms and clamp them together like a gator’s mouth at sporting events, but also upon meeting other fans in airports, in business meetings, and at shopping mall fast-food courts. 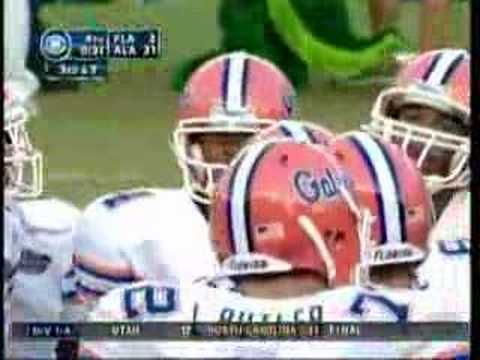 TP-ing the Quad
Because when you’re the third-most successful kid in the family, you’ve gotta make sure EVERYONE knows when you do something good, Wake students cover their entire quad in toilet paper after every football and basketball win. Duke and UNC still don’t notice.

TP-ing Toomer’s Corner
But no, Auburn, toilet papering part of your campus after big wins won’t make you a Top 25 academic school too. That said, the Iron Bowl's still one of sporting pilgrimages every dude needs to make.

Flagpole Kicking
On the way into the LA Coliseum, USC fans will traditionally kick the bottom of flagpoles on their way down Trousdale Parkway. This is done either for luck, or so students can show off their talents to onlooking recruiting officers from the LAPD.

Mirror Lake Jump
At midnight on the Tuesday before their annual football matchup with Michigan, Ohio State University students jump into a on-campus lake and desperately try to swim out of Ohio. Thankfully, none have succeeded.

Waving the Wheat
When the KU football team scores a touchdown or an opposing basketball player fouls out, Jayhawk fans put their arms in the air and slowly wave them back and forth to mimic the motion of wheat swaying in a field. 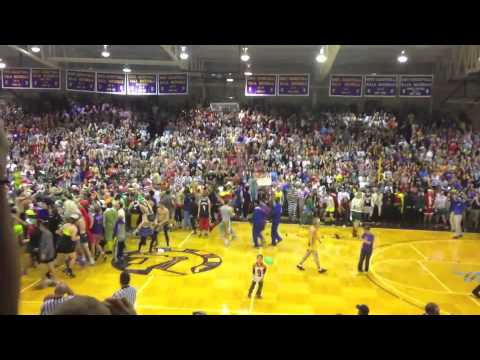 Silent Night
During this Evangelical college’s first home basketball game, the crowd takes a complete vow of silence from the opening tip until Taylor scores its 10th point. Then the crowd completely loses it, storms the court, and celebrates for several minutes without inhibition before returning to having no fun until the next year.

Hawkeye Victory Polka
If Shoeless Joe Jackson had ever bothered to stick around after a Hawkeye football win to hear the band play a song that starts “In Heaven there is no beer, That’s why we drink it here,” he would've been far less confused when he wandered out of that cornfield.

We Are… Penn State Chant
When you wear uniforms with no identifying markings, fans can sometimes forget who they’re rooting for. Which is why at PSU, one side of the stadium yells “We are?” and the other side answers “Penn State!” This is repeated three times until the asking side figures it out, at which point they say “Thank you.” Politely, the other fans respond “You’re welcome.” 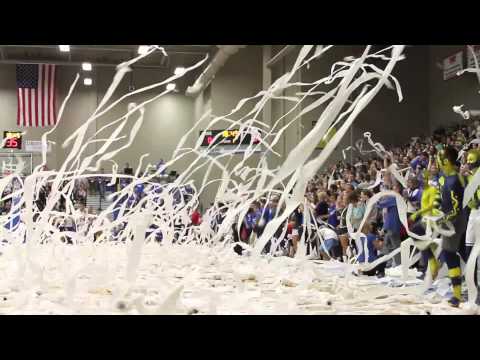 The Best Technical Foul in Sports/TP Game
After the Eagles score their first basket of the year, the student body goes berserk and covers the court in toilet paper, resulting in the same penalty Jason Kidd receives for telling his players to spill soda during the game.

Couch Burning
As part of their ongoing rivalry with Detroit to be the butt of every joke, West Virginia takes a page from the Motor City playbook and sets fire to perfectly good furniture after each home victory.

Midnight Yell Practice
At midnight before home games, the legendary A&M Yell Leaders lead about 20,000 students in traditional cheers right before the lights go out at Kyle Field. This is either a sign to kiss your date, or that Johnny Manziel will be selling autographs for two hours outside Gate 6. 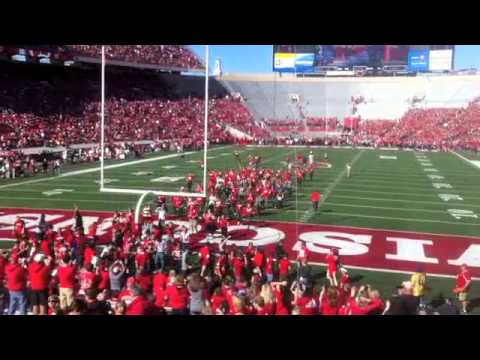 Cane Toss
Before the homecoming game, graduating Wisconsin Law students sprint onto the field wearing bowler hats and toss canes through the goalposts. Legend has it if the cane makes it though, they’ll win their first case. If not, they’ll have to be lawyers in Florida.

Tommy Trojan Wrap
As a thank-you to Trojan for wrapping us up all year, USC students wrap their landmark statue in duct tape the week leading up the game with UCLA.

Pushups
Because it's important that our soldiers stay in shape, the future military leaders at the Naval Academy do pushups after every touchdown, one for each point the Midshipman score. Nobody is gonna mess with a country who can do that many push ups. 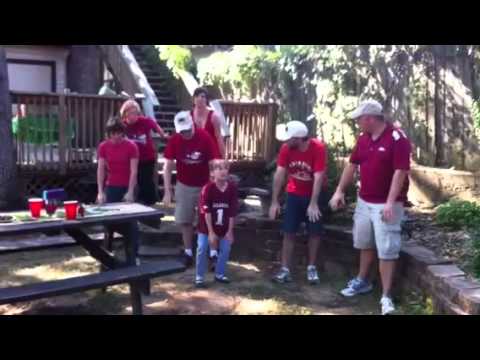 Calling the Hogs
In a cheer that has been known to cause Ned Beatty to sob uncontrollably, Razorback fans raise their hands from their knees while chanting “Woooo” for eight seconds, wiggling their fingers (which, of course, makes the “woo” louder), bringing down one fist while yelling “Pig!” before finally punching the air and yelling “Sooooie!” Yea, so you're probably better off just watching the video above.

Bearial
Before “The Big Game” every year against arch-rival Cal, Stanford students hold a fake funeral procession for the opposing mascot Oski the Bear, before hanging him in effigy atop of the White Memorial Fountain. And then being arrested for cruelty to fake animals, which's no doubt a felony in most of California.

Toast Toss
After the third quarter of football games, fans sing "Drink a Highball," and -- upon hitting the last line, "Here's a toast to dear old Penn” -- they throw toast on the field. Bread that’s then picked up by, no joke, a toast Zamboni. Because nothing but sheer genius and innovation comes out of UPenn, right?