United Is Finally Bringing Back Its Most Beloved In-Flight Snack

In general, we can agree: airplane food sucks. Many of us, Gordon Ramsey included, refuse to eat it at all. So, it’s a rare occasion that living, breathing, eating travelers are emotionally invested in an airline’s in-flight snack. But after United Airlines announced this week that it would start serving beloved Stroopwafel cookies again, people were not just emotional, but downright passionate.

“We’re starting 2019 on a sweet note -- the stroopwafel will be back in the snack rotation starting in January!” the airline announced on Twitter.

United introduced the Stroopwafel as an onboard snack in 2015. The Dutch treat, traditionally served with tea or coffee, is bookended by two delicate waffle wafer cookies, squishing a neat layer of gooey caramel between them. 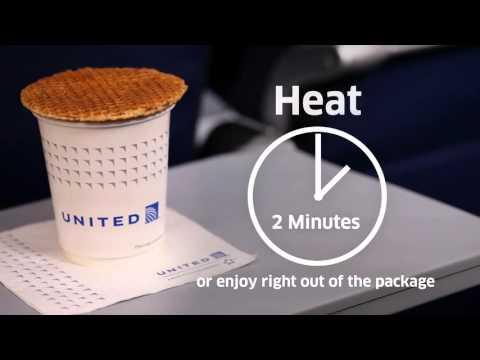 As shown in the video above, they can be enjoyed by floating atop a hot beverage cup for a couple minutes, softened by steam to create a sweet and gooey center, or straight from the package in its crunchy, chewy original form. Whatever you do, don’t dunk it. There have to be some rules here, and soggy cookies are taboo.

Passengers were enjoying the snack on morning flights ever since the introduction until June 2018 when United abruptly replaced it with maple flavored cookies. Outrage ensued.

A United spokesperson told The Points Guy via email the “intention has always been to bring it back.” Thankfully, that day has come. Here are just a few feelings people have about it.

Some are thankful for olives and Stroopwafels.

Others are bitter about their half-year long Stroopwafel deprivation.

And still others are the voice of reason to remind us, hey, you don’t actually need to fly to eat a Stroopwafel.

Stroopwafels originate in the Netherlands, rumor has it Gouda specifically. Legend says they were first made in the late 19th or early 18th century by a baker, Gerard Kamphuisen, out of leftover breadcrumbs and syrup flattened with a hot iron. In the 20th century, factories began producing them. Today, they are just plain ubiquitous.

Alex Erdekian is an editorial assistant at Thrillist and thinks things taste better when they're waffle shaped.