The Craziest Experiences You Can Have in Vegas... and Only in Vegas 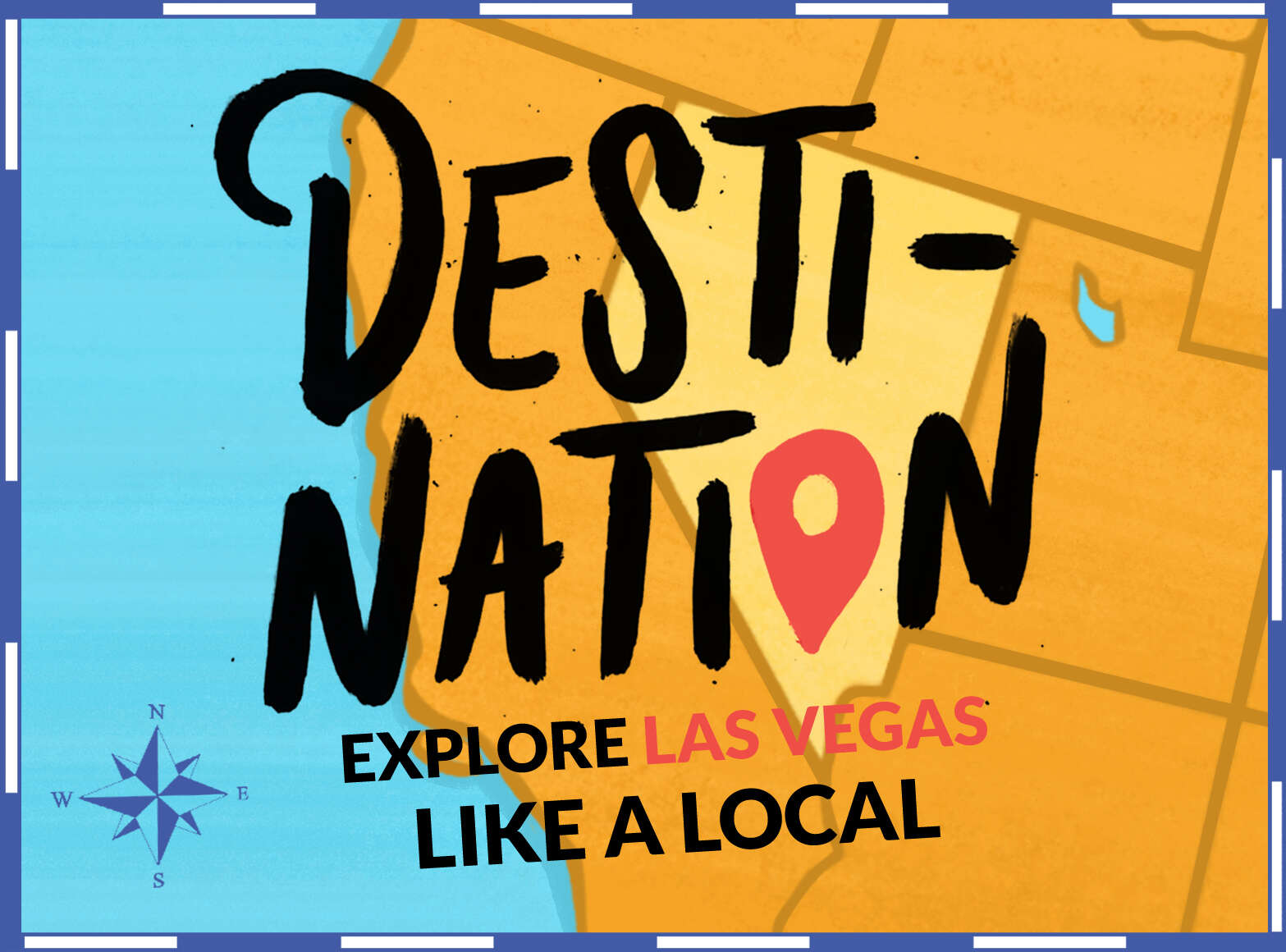 Nevada straight doesn't give a fuck. The state gave away its last one in 1931 as the local mining- and railroad-driven economy was shriveling and politicians, desperate, rolled the dice on legal gambling. Soon to follow were the most liberal divorce laws in the country. Not long after, once the country repealed Prohibition, booze was available 24 hours a day. Satisfied that it would go ahead and lead the charge straight to hell, the state then legalized prostitution. The Mob, knowing a good thing when they saw one, invented the Strip, a garish monument to poor impulse control.

So what do you get when you visit the Silver State these days? Freedom, man. Freedom.

When the world wants to escape the grind of 21st-century life, Nevada awaits with open arms (and knees), brimming shot glasses, plus a dose of adrenaline. If you have a vice you want to try while you're here, or a piece of this madcap history you want to touch, you're free to loosen your wallet, your belt, and your fraying grasp on reality in America’s frontier fantasyland. Step up to the things you can't get away with anywhere but here.

If any bar mines its Wild West history, it's the 104-year-old Pioneer Saloon -- the lone surviving business in this former lead-producing boomtown, a half-hour south of Vegas. Its killer atmosphere is magnified by the bullet holes blistering the walls. The actual coroner's report hangs next to the punctures, ruling that the murder was a justifiable homicide -- for, after all, the victim was cheating at cards. During its regular "haunted lockdown," this Old West haunt invites you to contact ghosts, including that of Hollywood Golden Age starlet Carole Lombard, whose plane crashed on nearby Mount Potosi in 1942.

Hit up an alien-themed diner and brothel

Of course someone has figured out how to cash in on Area 51 -- the desert Air Force base where the US military hones experimental weaponry and maybe/probably/definitely detains aliens. Just a short jaunt away you can feed your intergalactic fantasies at this combo diner, gift shop, and, yes, brothel called the Area 51 Alien Center. As if Nevada prostitutes needed any weirder clientele.

It's frankly a miracle that a place with such a short attention span saved some of the most iconic images of Atomic Age entertainment. Most classic Vegas hotels have been demolished, but at the Neon Boneyard you can still see the larger-than-life signs from the heady days of the Rat Pack. The tour guides can rattle off who designed each piece, the sordid history of the hotels they belonged to, and nearly everything you ever wanted to know about mid-century, mobbed-up Vegas.

Have a blast as a sniper

All the talk of the Wild West and the mob might get you hankering to squeeze a trigger or two. If you have a hundred bucks to blow, swagger into the Strip Gun Club. The only shooting range on the Las Vegas Strip will set you up with a survivalist's lineup of handguns, shotguns, submachine guns, the works. When you're done playing a strike force operative, check out the "Dillinger Door," a bank vault enclosure defeated by John Dillinger himself. Or go all Doom 2 and invest in the "exploding torso" targets: evil clowns, Nazi officers, and zombies.

Dangle and spin from 900ft above the Strip

Do you like to get high? I mean trippingly, nauseatingly high? Then dangle yourself over the edge of the Stratosphere Hotel & Casino, a mere 90 or so stories above Vegas. As you pray for forgiveness, the aptly named Insanity ride will whirl you at speeds of up to three G's. Just don't look down -- oh, never mind, you're at a 90-degree tilt, facing straight down. Like so much of this trippy city, it's all better with your eyes wide open.

Croon at a Rat Pack and mobster haunt

The old stages where the Rat Pack performed may have vanished, but the dimly lit corner booths in Champagne's where they engaged in post-show shenanigans remain! This hideaway has changed little since its 1966 debut: The red-and-gold velvet wallpaper has weathered decades of smoke and debauchery. Nestled in a neighborhood formerly filled with entertainers, Frank Sinatra would reputedly rendezvous with his mistresses here, and Sammy Davis Jr. owned a home nearby. Champagne's was also known as a hangout for the infamous Hole in the Wall Gang. Now a karaoke lounge, this haunt still draws an eclectic crew of characters, and you can pretend you're Dean Martin for a spell. And as the name implies, the bubbly flows freely here.

Imbibe free, unlimited wine with a side of pasta

Are you searching for good value steeped in steaming plates of pasta? Do you want to gulp down unlimited wine with your dinner mere paces from the Strip? Enter the cavernous Battista's Hole in the Wall -- a place swimming in red sauce and kitschy Old Vegas decor. While you indulge in nostalgia (and the endless house red and white served with every entree), you can be serenaded by Gordon Jaffe -- an 80-something accordion player who has imbued the atmosphere with even more charm for more than 30 years. As you rise in a contented daze after dinner, don't forget you can take your extra wine to-go. Take the cup, and the cannoli.

Raze hell with your own bulldozer

Vegas mobsters used to be notorious for burying bodies out in the desert. You can judge for yourself just how hard that would be when you take heavy equipment around Dig This Las Vegas. In this sandbox for adults you can wield the controls of an excavator, bulldozer, or steer track loader. Tired of stacking tires and building mounds? Well, how about demolishing a car in the infamous "Aggression Session"? Ten-year-old you would approve.

Nowhere in Vegas will you get more fun per quarter spent than at the Las Vegas Pinball Hall of Fame and Museum, the 10,000sqft no-frills emporium a few minutes east of the Strip dedicated solely to pinball. The owner and a group of pinhead volunteers have worked to restore each piece to ensure that visitors can go full tilt in this den of nostalgia. Look for the handwritten index cards explaining the mechanical and cultural significance of the machines, many of which are your favorite arcade standbys, and others of which are operational in only a few places in the world.

Have your mind blown at the Atomic Testing Museum

Between 1951 and 1992, the Nevada Test Site (just 65 miles northwest of Las Vegas) was the pummeled ground of a staggering 928 nuclear tests. Now the National Atomic Testing Museum traces the rise of the Atomic Age and the region's role in the Cold War. Most striking are the exibits in this Smithsonian-affiliated museum that detail how the above-ground bombs became tourist attractions: Travelers and locals watched transfixed from hotel rooftops as mushroom clouds rose above the desert floor. Indeed, revelers sipped atomic cocktails as they drank in both the sights and radiation.

Blaze your own trail in a dune buggy

You can rent fancy wheels in Vegas, but to live like a true desert dweller you need to rough it in the wilderness. At SunBuggy Fun Rentals you can take a dune buggy on a guided trek through the blazing-red sandstone of the Valley of Fire. Or, you can embark on a death-defying, high-speed chase through challenging desert terrain. No, you're not Furiosa, but this may be your greatest chance to lock in that Fury Road fantasy excursion until your next bachelor party in Namibia.

Wise up to the Mob Museum

No city has flashier founding fathers than Vegas. Bugsy Siegel, Moe Dalitz, and other wise guys created the glittering ideal of Vegas by building extravagant hotels and hiring top entertainers. As the money flowed in, their influence only grew. The Mob Museum chronicles it all in gory detail riddled with bullets, recordings, and artifacts galore. The museum also narrates the nationwide efforts of law enforcement to curb underworld activities. Traversing the building's former courtroom (the scene of 1950 Senate hearings exposing organized crime), you'll marvel at the scope of what Vegas owes to gangsters.

Scope out surrealist art in the remains of a dead boomtown

Less than two hours outside of Las Vegas lies/crumbles one of the most spectacular true ghost towns in the West. With its own stock exchange, an opera house, and a red light district, Rhyolite may have been Nevada's biggest city in 1907 when its gold mines went bust. Arrive at dusk and see the shadows rise between the husks of a once-marble-floored bank, a multi-story school, a house of beer bottles, and the totally intact Spanish Mission-style train depot (among other ruins). Capping the surreal scene is the Goldwell Open Air Museum and its installations that contrast with the decaying ruins. One sculpture resembles a giant woman composed of LEGOs sporting a prominent blonde bush; another is a hulking metallic miner with a penguin for a sidekick. You'll marvel. Then the stars will come out.

Cap the undead in an apocalyptic cityscape

Immerse yourself in Adventure Combat Ops' apocalyptic world, where only you and your team stand between an army of ravenous zombies. The 1.5-hour quasi-theatrical, laser-tag-on-'roids session will see you kicking down doors and taking names -- all while directed by special-forces vets. The wasteland cityscape features special effects, multiple homes, lasers, intense audio, and getting yelled at by dudes who probably had to do this shit for real somewhere.

SlotZilla -- you should really "hang" downtown when you're in Vegas. The city's historic center features a zip line spanning the entire Fremont Street Experience. As you glide beneath the canopy, you can spy the city's true, weird soul below. Scantily clad women greet tourists along with overweight men in thongs. Beat-boxer buskers are stationed near an Edward Scissorhands. Homeless people, tourists, locals, and high-school students alike throng near the stages to watch some of the most talented cover bands like Spandex National playing till 1am. Stretching from the oldest hotel in Vegas (the Golden Gate) to the mob's first hotel (the El Cortez), you have a hawk's-eye view of Vegas' historic, pulsating, wild heart.

Drive a Lamborghini around a speedway

Maybe you're the sort that would let a lawsuit alleging unsafe driving conditions deter you from taking a Ferrari 458 Italia or a Shelby GT around a 1.5-mile speedway track. You should think about some basic safety measures while you and a driving coach decide whether you want to feel a Porsche Cayman or an Audi R8 underfoot while you take some laps. Seriously, do be careful. Also, bring cash: Package deals start at $400.

Dave Tzorfas is a Midwestern transplant and a voracious consumer of Nevada’s best dives and delicacies. Enthralled by Nevada’s history and its status as the least explored state in the Lower 48, Dave relishes every opportunity to discover new sites and learn new lore. After stints as a Congressional aide and nonprofit development director, Dave embarked on the freelance life. Now, he can deftly balance fundraising for worthy causes while stockpiling an encyclopedic knowledge of happy hours.