The Unique Florida Adventure You Need to Experience in Your Lifetime

The water is murky this morning. As I lie in the Crystal River face down and snorkel up, all I see is sand and grit. Grit that all of a sudden appears to be moving UP, toward me, at a pace much faster than I’d like to have an entire river bottom blasting at my face. As it gets closer I can make out a snout. A blink later, I’m face-to-face with a 1,500lb sea mammal, looking at me like a befuddled puppy. The thing is massive, a zeppelin with whiskers, and it seems to have no qualms pushing me out of the way so it can breathe.

“Ah, shit!” I yell as I kick to get away. The manatee doesn’t seem the least bothered by my outburst. He continues toward the surface for some air, then glides gracefully back to the river bottom. As I track his descent, I can make out another manatee. Then two more. Turns out I’ve been snorkeling over a whole pod of these things for 10 minutes. They all swim up and around me, snuffling and going about their morning rounds like I’m not even there.

Experiences like these make people -- especially Floridians -- put "swimming with manatees" squarely on their lifetime bucket list. It’s as close to living as a part of a herd as one can safely get when observing animals this size. But it's also not nearly as simple as jumping off a plane anywhere in Florida and strapping on a snorkel.

Only in a select few places can you actually swim with manatees, and you shouldn't wade in there without reviewing some rules and tips. We talked with Mike Engiles -- owner of Crystal River Watersports and president of the Manatee EcoTourism Association -- to learn everything you need to know about swimming with manatees.

The one place you can go

Though manatees live all over Florida, the only place you’re legally allowed to get in and swim around with them is Citrus County. It’s on the Gulf coast, about two hours northwest of Orlando and 90 minutes north of Tampa. Environmental protection laws otherwise restricted swimming with manatees, but as Citrus County's economy was dependent on manatee tourism, it was grandfathered in.

Two Citrus County towns offer manatee encounters: Crystal River and Homosassa. Crystal River is home to King’s Bay, the best-known manatee swimming area, where as much as 10% of the state’s sea cow population congregates. Here you’ll also find Three Sisters Spring, a natural spring that manatees flock to during the coldest months. Homosassa has Blue Springs, a freshwater spring under a natural aquifer where manatees come to find warm water.

And the best time to be there

Though it won’t exactly be beach weather, January and February are the best months to go. Manatees don’t actually have any blubber, and can’t thermoregulate. So when the water in the Gulf of Mexico dips below 64 degrees, they go searching for warmer water, and end up in Citrus County, where hundreds of natural springs -- including Kings, Magnolia, Hunter and Jurassic Springs -- also feed the bay. Between November and April this area attracts the highest natural concentration of manatees in the world.

“We had about 850 manatees out in Kings Bay one day earlier this year,” Engiles says. “The survey only has 6,500 in the whole state.”

Even in the off-season you're likely to find a handful of the gentle giants who decide Kings Bay is good enough for a permanent stay.

“We have about 30 to 60 manatees that live here year round, so operators are always running,” Engiles says. “You don’t see the number you do in the winter, in the summer the gulf is up around 90 degrees so they’re wherever they want to be eating. We only had two days last year where we didn’t see any.”

How many you see will vary from year to year. In 2015, for instance, Hunter Springs had a large number of manatees all summer long, but when a large dredging project started, the noises scared many of them off.

But you have to get there early...

Manatees get going in the mornings. They wake up, look for breakfast, figure out where all the other manatees are, and do whatever else manatees do to start the day. Once that's all settled, they spend most of the afternoon sleeping. So if you head out on an afternoon excursion you’ll probably only be able to spot them when they come up for air once every few minutes. You can still spot them in the water while they’re sleeping, but as Engiles says, “Why would you want to get in the water with a bunch of sleeping manatees?”

... and preferably swathed in neoprene

The water around these springs is warm compared to the Gulf of Mexico, but it’s not exactly a bubble bath. Wetsuits are strongly recommended, and can be rented from whichever operator you choose. They allow you to stay in the water longer, and remain more buoyant, out of the way of the manatees. You should definitely also wear a mask and snorkel so you can keep your face in the water, as well as an additional flotation device for safety. 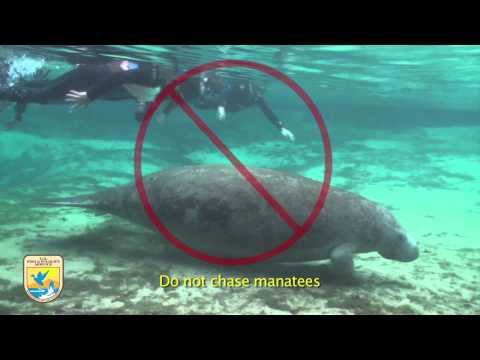 And still, there are more rules

The US Fish and Wildlife Service has an eight-minute video called Manatee Manners that goes over the 12 prohibited behaviors when swimming with manatees. Though you might think riding one would make a cool shot for the 'gram, it'll get you arrested. You’re encouraged to practice what’s called “passive observation,” which means watching manatees from a distance, at the surface of the water. Other manatee don'ts include:

It's likely to be a safe day in the water

Manatees are herbivores, and as large and potentially menacing as they might look, they're about as aggressive as couch cushions. They have no natural predators, and therefore no inherent defense mechanisms. The only potential danger for swimmers is getting between a mother and her calf. Manatees do sometimes teethe, and when their front teeth get too big they may chew on a rope or a line. Or the occasional ponytail.

“People are always surprised at how large these animals are,” Engiles says. “Unless you’re a regular scuba diver, you’ve probably never been in the water with something as big as a manatee.” Indeed, manatees can be up to 10ft long, and when mature weigh between 1,500 and 2,300 lbs. Newborns are about 4 feet long and weigh 40 to 100 lbs. Again, not small. But not at all a threat.


But go with an expert

Though it is technically legal to swim with manatees, a visitor to the area probably won’t know where to go, or how to find them, or have all the right equipment. The Crystal River National Wildlife Refuge and the Kings Bay Manatee Refuge are both large spaces with limited access, and spending the extra money to go with an operator will make the trip easier, safer, and more efficient. Obviously Crystal River Watersports is a reputable outfit, as are the guides that leave out of the Plantation on Crystal River, but there are no shortage of other operators in Citrus County.

“Swim, enjoy the moment, and let the manatees do what they want to do,” Engiles says. “People need to respect the animals, like they’re going out into their home. It’s not a petting zoo. These are wild animals and you don’t want to disrupt their natural behavior.” The manatees, you'll soon see, are in no hurry whatsoever. So take their cue.

Matt Meltzer is a staff writer with Thrillist who screamed like a little girl the first time he swam with manatees. Follow him on Instagram @meltrez1.