Yellowstone Lake Hums Mysteriously and Nobody Knows Why

One of America’s most famous lakes has been known to sing.

Image by Grace Han for Thrillist

Yellowstone Lake is one of the more dangerous bodies of water in the US: 450 feet deep in places, its 136 square miles stay at a balmy 43ºF year-round, with southwesterly winds able to churn up five-foot waves. You definitely don’t want to swim in this high, subalpine sea, much less canoe its open waters before an afternoon storm.

What you can do is sit by the shore and listen for a hum.

Accounts of these mysterious sounds—some call them songs, whispers, or even music—date back to the park’s very first year, from 1872’s Hayden Expedition.

“While getting breakfast,” wrote F.H. Bradley, “we heard every few moments a curious sound, between a whistle and a hoarse whine, whose locality and character we could not at first determine.” Other credible sources, like Clyde Max Bauer, the park’s chief naturalist in the 1940s, continued the sound’s lore through the 20th century.

You’re allowed to be skeptical right now. As one of the country’s busiest, most-loved tourist destinations, surely this phenomenon would be well-known if it were true (and not just well-documented, which it is). But perhaps Captain Hiram Martin Chittendon—an engineer who helped develop the park—put it best: “Its weird character is in keeping with its strange surroundings. In other lands and times it would have been an object of superstitious reverence or dread, and would have found a permanent place in the traditions of the people.”

“I like to imagine there's a mystical creature that lives in the depths of Yellowstone Lake calling out a lonely song.”

Now, these historical accounts don’t seem to care about the season: Summer or winter, strange sounds have been heard on and near Yellowstone Lake for over 100 years. While those stories are impossible to verify, Kristine Brunsman, supervisory park ranger, has heard the sounds for herself—but only in winter.

“I've been lucky enough to hear the lake sing for the last three winters,” she says, noting that the sound is hard to characterize. “In 2018 and 2019, the sound was rather dull and often reminded me of corrugated metal flapping in the wind or maybe a far-off mechanical sound, like the engine of an airplane. In December 2020, I heard songs I'd never heard before—more ethereal notes, with whomps and whoops and whooos—akin to sonar pings or the call of a whale deep in the ocean.”

Brunsman was understandably in awe. “It gave me goosebumps. I like to imagine there's a mystical creature that lives in the depths of Yellowstone Lake calling out a lonely song, its roars echoing in isolation.”

No one quite knows what the sound’s origins are—probably not some solitary, psychrophilic Nessie, unfortunately—but there are theories. “My hypothesis,” Brunsman explains, “is that a combination of ice cap, air, and water temperature; wind and wave action; and echoing off the crown of the mountains that encircle Yellowstone Lake create the perfect environment for the sound.”

Another theory has to do with moving magma generating Extremely Low Frequency (ELF) waves. These waves in turn resonate off one another, confined by the surrounding topography—it’s worth noting that the sound is said to travel.

“I'm sure localized tremors and underwater thermals also play a role in the notes we hear,” Brunsman adds.

If you’re still not convinced, know that hums across the globe—like the Taos Hum—confound even the best conspiracy theorists. But this one is documented: Thanks to Yellowstone’s extensive sound library, you can hear the sound from your couch. 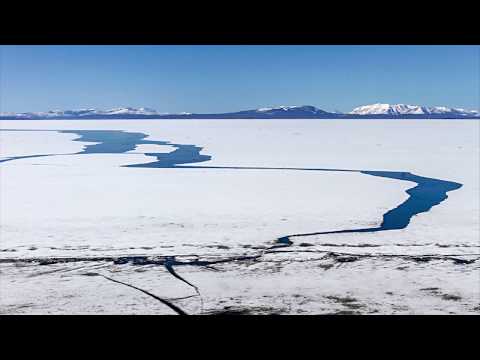 How to hear the lake hum yourself

The odds of any weekend tourist hearing the hum aren’t good, but visitors can up their chances by watching the weather.

“It seems to happen most early in the winter or later in spring when the lake is capped in ice,” Brunsman notes, adding that it can happen only once or for a few days in a row. “This winter, we had extremely cold days early in the season and the lake began to freeze without its usual blanket of snow. It would make sense that the snow acts as a muffler in most years, which is why it was so clear, crisp, and loud this December.”

If you do find yourself near Yellowstone Lake, take a moment for silence. Most visitors “mistake the metallic sound for a large vehicle or heavy machinery off in the distance or simply wind in the trees,” adds Brunsman. Yes, those are possible, but it might just be the lonesome song of Yellowstone Lake.

Jacqueline Kehoe is a writer, photographer, and geology geek. See her work on Instagram at @j.kehoe.