If you walked into The Casbah before it opened for the day, the words “nationally iconic music venue” might not be what comes to mind.

Tucked between I-5 and San Diego International, the windowless nightclub feels about as spacious as a studio apartment, with year-round holiday lights strung throughout and black walls peppered with random band stickers and concert posters. If you took a closer look at some of the names on those posters, though, it would all start to make sense. The Black Keys, The Smashing Pumpkins, and Arcade Fire are just a handful of the generation-defining artists who've rocked the stage at this iconic San Diego space in the 30 years since its inception, earning it an outsized reputation on the national music scene.

“The White Stripes came here a few times. The first time, we added them to a staff members' birthday party for a few hundred bucks,” recalls Tim Mays, the club’s co-founder. “There was only maybe 40 or 50 people in here that time. Jack White was too young to legally come into the bar at the time, so he actually had to wait outside until they took the stage.”

Huge national acts continue to roll back into the tiny Casbah, often because of the chances Mays took on them before they got their break. That willingness to take chances on new talent is part of what's what's helped make Mays something of a local music legend, and established The Casbah as San Diego’s answer to The Viper Room in LA or The Showbox in Seattle. It's also why, in order to truly see the appeal of this place, you shouldn’t visit when a national act is in town; the better move is to come by when the headliners are complete unknowns.

To understand how we got here, and how The Casbah cemented itself as a SoCal institution, you need to look back on the humble beginnings and DIY ethos that molded this punk rock venue into such a landmark.

Mays and his fellow co-founder Peter Verbrugge had been working as local punk rock DJs and promoters for years, putting on gigs at old San Diego haunts like The Skeleton Club and running their own bootstrapped promotion companies. Both had grown disillusioned with the prospect of operating established music venues under outside leadership, and so the duo found themselves -- as Mays puts it -- ”walking around late one night in San Francisco looking for warehouse parties with vials of cocaine in our pockets and Pepto-Bismol and beer bottles in our hands.” That's when the idea struck: Why not start their own bar, where we could throw parties every night?

With the help of Verbrugge’s friend and third Casbah co-founder Bob Bennet (who passed away in 2015), the duo scrounged together enough cash to buy an old beer and wine joint on Kettner called The Pink Panther. Mays, Vebrugge, and Bennet ran the place for just over three years before deciding to move onto bigger and better things: namely, a place they could host live music. They found and purchased an old Irish bar called the Harp and Shamrock -- and, borrowing from their punk rock roots, they settled upon a name that would become iconic.

“We decided to rename it The Casbah to borrow from The Clash’s motif,” Verbrugge says, referencing The Clash’s seminal 1982 hit. "Plus, there was always this notion of kasbahs in Morocco being famous gathering places for insurgents and musicians. We thought that was pretty apropos for us."

Initially, the intention was to run The Casbah like a traditional coffee shop/music house, hosting local jazz and R&B acts on a small scale. Fate had other plans, however. “I was a punk rock promoter from 1980-1986, so when we got a bar, I started getting calls from new booking agents in the indie and punk scenes in Chicago and back east,” says Mays. “We started booking bands like The Jesus Lizard and Nirvana.” That latter performance in 1990 would end up becoming a turning point in the club’s history. 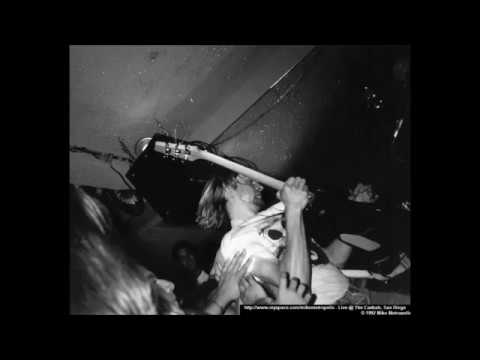 Live recording of Nirvana’s 1990 performance at The Casbah

Nirvana had only been around a few years, and The Casbah itself was barely a year old when Kurt Cobain and Krist Novoselic rolled into town. The band was still a month away from adding drummer Dave Grohl to their roster when they played The Casbah, and their performance -- while definitely talented -- was tremendously raw. Then, one year after their Casbah show, Nirvana released Nevermind and effectively became the biggest band on Earth, and everything changed.

“Suddenly, after Nirvana broke big, San Diego and The Casbah were part of the national scene for these touring indie bands even though the old location only fit about 75 people,” says Mays. “We were booking acts like the Lemonheads and the Goo Goo Dolls.” Thanks to this newfound attention, the club quickly outgrew its original location and had to move to a larger venue down the block (the 200-person space where it still resides today).

The Casbah continued to grow in prominence every year, and while Mays acknowledges it hasn’t been without its ups-and-downs -- he took out a line of credit on his house back in 2005 to keep things running smoothly -- “there never was any thought we’d close it.” The club's notoriety over the decades has led to co-promoting shows at venues all across town, under the “Casbah Presents” concert series name. Mays says this allows him to bring back acts he is close with that have outgrown the Casbah to spots like Music Box and Observatory San Diego.

“It’s not unique in the music industry that early on in an artists’ career, if a promoter took a chance on them to help them grow, that band would have a loyalty to that promoter... and would come back to do shows with them multiple times,” says George Varga, the San Diego Union-Tribune's pop music critic for the past 31 years.

“What’s unique is that, with Tim, it’s not dozens of bands who have this loyalty to him; it’s hundreds. And I know for a fact it’s part of the reason bands are more willing to come to a smaller venue like The Casbah even when they could play bigger shows. They all come back because he’s the guy who took a chance on them when nobody knew them.”

“Having the Casbah community means everything… It's not like anywhere else in the country."

To truly appreciate what The Casbah means to this city, show up on a Sunday or Monday night. You'll miss the big names, sure, but tickets are usually $6 (or cheaper), and the bands onstage are almost always local unknowns playing to an eager crowd of hardcore Casbah denizens.

“Having the Casbah community means everything," says Robert “El Vez” Lopez, a Chula Vista-born musician. "It’s a home base clubhouse where you feel comfortable trying out new songs or playing with a new band. And the fans at The Casbah will support you because the community at the venue aren’t just fans -- they’re friends and musicians who all blend together. It’s not like anywhere else in the country.”

According to Verbrugge, that sense of community is by design. “Bands in San Diego always have a place to play there,” he says. “They might have to start on Monday nights, but Tim's always working with bands to help them grow, and giving them a place to play where they can invite their friends to come out. It’s a winning formula.”

Mays' winning formula has carried the venue for the last three decades, and so it's only natural to ask him what he hopes The Casbah's legacy will be if and when he decides to step away. “Well, we’ve got another five years on our lease here and then hopefully we renew beyond that point,” he says. “At some point, I’ll either retire or turn it over to my son or employees who have been working there for years.

“And I guess I want that to be part of our legacy: we take good care of people. I have employees who have been working there for 20 years, just because we treat people how we’d want to be treated. Ultimately, I’m just happy we’ve established ourselves as a place to come see good music and have a great time while being treated by dignity from the bands, fans, and employees.”

Rob Pursell is a writer focused on anything from culture to sport to dining and nightlife, whose reporting career has brought him everywhere from Virginian hippie communes to the dining tables of competitive hot dog eaters.