We Asked A Magician How To Hide Weed From The Cops

Do you remember that video from last year of the magician hiding weed from a cop? Pulling a fast one on the law might actually be a good skill to have while we wait for our state legislatures to come around to legalization, so I started contacting some magicians.

The world of magic is a difficult one to infiltrate, a fact that was made apparent during our shockingly long search for a wizard who would help us. They either felt uncomfortable with the subject matter or refused on the basis that "it would be a big conflict regarding the magic community." Translation: the Magician's Code. Yup, it's real.

Finally we found Rich Ferguson, a master of prestidigitation who didn't think that talking to us was betraying the trust of his peers and learned exactly what to do if confronted green-handed by a cop. Just remember, these aren't tricks—they're illusions, Michael!

How do magicians have a leg up on regular "non-magic" folks?

Magicians have the ability to charm, influence and manipulate a person. I’ll share a true story:

I found myself getting a speeding ticket along a speed trap near my hometown. The officer handed me a clipboard to sign that had the copies of carbon paper tickets along with my information, car details, etc. Without a hesitation, I altered “I’s” into “T’s” and “C’s” into “0’s.

I changed a few basic items including the license plate. I signed the ticket and handed back the clipboard. I honestly did not realize what I had done and acted on instinct as a highly-trained magician. 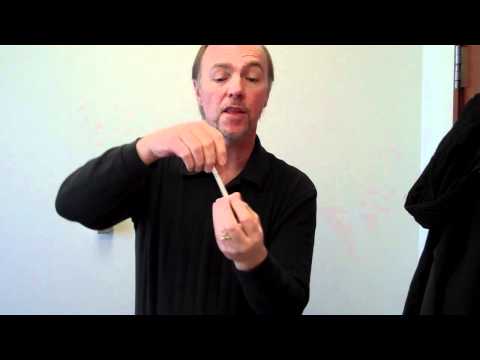 What could you do if you were caught green-handed?

There are dozens of techniques to move an object around the hand and vanish it. There's the 'French Drop.' It allows you to fake take something and retain it in the hand still. For a long, skinny object like a joint, you can do this easily.

If we are addressing a bag of weed, specifically, it could be handled in various ways using [an approach to communication] called NLP—Neuro-Linguistic Programing—meaning a skilled magician can apply the best strategy to either charm, entertain, influence, or manipulate the situation.

Every case is different, but let’s say I was caught with some weed. Besides that obvious approach of vanishing it with sleight of hand and fast thinking, I might say the opposite of what a cop would expect like "YES! This is weed! My friend James let me borrow it so I could film this funny YouTube skit. James has a card and legally uses weed… I do not use it!"

Having a YouTube video script always in the pocket to confirm the “story” could be beneficial as a way to plan ahead. However, you’d be using that as a contingency in the event you did not come up with a strategy on the fly using observation, magic skill and/or influence.

How do you make the sleight of hand more effective?

It's like playing the guitar. It only comes with practice and experience. You can read about it and talk about it all day. That will not give you the skills of actually playing. Refining and mastering aspects within the magical arts takes tremendous practice.

I would not suggest starting with cops, ha! The golden rule of mastering influence is learning to master reading people first. It’s the magical art for a reason…not to be confused with magic shop tricks.

So, if all else fails, how do you get out of handcuffs?

You don’t. Your best chance is to be slick enough to not hear the clicks of the teeth of those silver bracelets in the first place! I could fill your heads with all sorts of lock-picking techniques and dreams of badass escape, but I’d be blowing smoke up your ass.

The truth is, escape artists may have some amazing skills, but once you’re booked you’re done...it’s not a magic demonstration any longer and the rules are not in your favor.

The French Drop: Step One

Hold your little baggy of weed—or oregano, in our case—in your left hand.

As you reach for it with your right hand, make sure the baggy is between your thumb and your index finger.

Release your left thumb and allow the baggy to fall into your palm of your left has as your right hand mimics the act of picking up the weed.

Ball up your right fist as if the baggy was on the inside. At this point, you would put your left hand by your side. Don't turn your hand towards anyone as I'm doing in this photo...this is for educational purposes only.

At this point, with all eyes directed to your right fist, you can properly dispose of the weed in your left hand. Or you can hide it in your butt, obviously.

Jeremy Glass is a writer for Supercompressor and smells like oregano.

Want more of the stuff you shouldn’t tell Mom about delivered straight to your inbox? Click here to sign up for our daily email.