The 11 Most Outrageous Items Ever Shoplifted

Everyone went through a shoplifting phase. If you don't believe me, I invite you to check out my extensive collection of wallets and skinny jeans from Urban Outfitters. Sorry, guys. Socially irresponsible? Sure. Easy to pull off? Definitely.

These days, you can rip off virtually anything that discretely fits in your pocket. When a person goes above the law and manages to pull off a heist of epic proportions, all those jacked novelty bottle openers you have under your bed are instantly put to shame.

Presented with caution and awe are the most outrageous items ever shoplifted—don't try this at home, unless you live in a Best Buy, then go nuts.

This story of a Hoboken man who tried to get away with stealing $288.17 worth of deodorant from doesn't make much sense until you finish the article and read that he was also found with a hypodermic syringe. Sometimes drugs will ruin your life and sometimes they'll inspire you to smell good—every single damn day of your life.

Ripped from the pages of Reddit on a thread entitled, "What's the biggest thing you've ever shoplifted?" One user gave the world this little nugget of Yuletide thievery:

"I believe it would have been a 8 foot Christmas tree - They were using a recently closed Kmart store for selling the trees and I noticed that people were picking their trees out, pulling the price tag from them and going to the register to pay for them. I simply pulled the tag, and skipped the going to the register part, and carried out one of the finest trees in the place. At which time, I had one of the tree sales team help me tie it to the top of the car. 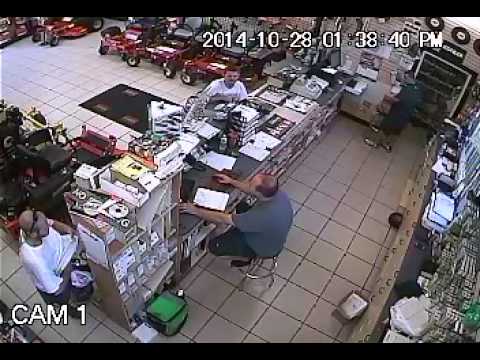 A man from—you guessed it—Florida, once attempted to steal a chainsaw by sticking it down his pants. The 38-year-old was apprehended by the store clerk, because it's pretty hard not to notice a chainsaw in someone's slacks...even in Florida, where nothing makes sense.

Beats by Dre might be the best advertised product since Christmas, so it's no wonder that people want to get their greasy little hands on them. Last year—suspiciously close to Christmas—a Bismarck couple stole 18 pairs of Beats, totaling $3,570, from a store by stuffing them into their duffel bags. Whether or not their auditory experience was improved has not yet been verified.

Not only did a man steal three pairs of pants, but he went on to wear them all at once, go into a CVS, and go on a low-grade crime spree. Stuffed into his extraneous slacks were four bottles of moisturizer and five Gillette Fusion razor blades.

Regardless of the distinct lack of discretion, people seem to love the method of sticking stolen items down their pants. An Ohio man used this method when he tried to rip off four large bottles of olive oil. However, he was caught and charged with one count of misdemeanor theft. Whether the chicken at his house was properly moistened to his liking was not reported.

According to a report published by ABC, the very same company who televised such hit cancelled shows like Cop Rock and The Mystery of Al Capone's Vaults, one of the most purloined items are high-end vacuums. Also, according to Google, an adequate synonym of the word "steal" is "purloin."

Specifically eight packs of the frozen crawfish tails, totally a staggering $75. This happened in New Orleans, the home of delicious food. Hey, if it's a crime to make a delicious stolen crawfish gumbo for you and your friends, then I'm guilty as charged.

A local Michigan newspaper reported in November of 1994, a rather unpleasant incident where a man was stole a condom machine from the bathroom of a bar. A resident told the police she looked out the window and saw the suspect walking down the street carrying the machine. He was found in his house with 48 Jimmy-caps and $31.75 in quarters.

After his accomplice faked a heart attack to create a diversion, a Florida man (go figure) made off with $379 worth of toys, including a motorized Barbie Power Wheels, Leap Frog tablet and a Barbie Glam Vacation House. The two men were eventually caught and charged with grand theft, and an undying love for Barbie. We assume the getaway looked something like the above gif.

While this sounds pretty weird and unusual, it's actually really common—a 2010 DailyFinance article named meat among some of the most shoplifted items in America. HEY—if it's a crime to prepare a nice stolen steak dinner for your family and friends, then I'm guilty as charged.

Jeremy Glass is the Vice editor for Supercompressor and his favorite music video is, of course, Jane's Addiction's "Been Caught Stealing."